News: the Design Museum in London has defended its decision to give its Designs of the Year top prize to a Zaha Hadid building in Azerbaijan, following widespread criticisms of the award on human rights grounds.

"It's a prize about architecture rather than politics and its architectural quality is outstanding," Design Museum director Deyan Sudjic told Dezeen.

"The jury made a decision on what they thought was the best project. I support that decision but I played no part in making it."

Sudjic also defended the apparent London bias of the prize, which this year saw an all-London jury give the prize to a London-based architect - the fifth consecutive year that a Londoner has won the award.

But he added: "We listen and we want to improve." 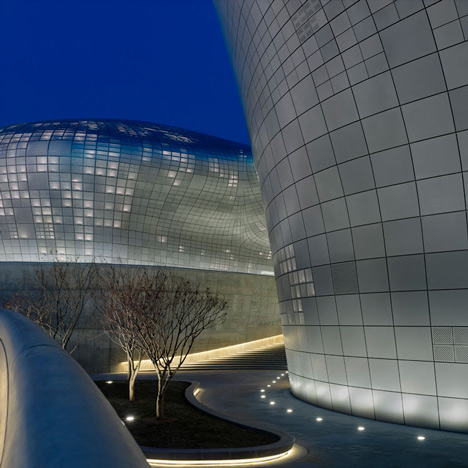 Sudjic's comments follow a backlash on Twitter and in the international media, after the prize for the best international design of the year went to Hadid's Heydar Aliyev Center in Baku, the Azerbaijani capital.

Human rights groups claim that residents forcefully evicted to clear the site for Hadid's cultural centre, and point to wider human rights abuses in the country including election rigging and torture of prisoners.

Former Azerbaijani human rights worker Rebecca Vincent told The Independent that the situation in the country  "is getting worse not better".

She added: "It would be really helpful if a well-known figure like Dame Zaha Hadid could raise these issues while working in the country."

The Design Museum responded to the backlash in a statement issued this morning. "There always has and probably always will be a huge amount of debate around the ethical implications of large scale architectural projects," the statement said. "Designs of the Year always provokes a strong reaction, and the conversation around the realities of contemporary architecture is one that the Design Museum wants to be a part of."

It added: "There is no doubt that Zaha Hadid is a hugely talented architect, and this is what the Design of the Year award recognises."

The Iraqi-born British architect previously faced criticism for saying that architects have "nothing to do with the workers" who have died on construction sites in Qatar, where her stadium design is being constructed for the 2022 FIFA World Cup.

Hadid's building is named after the former ruler of Azerbaijan. Heydar Aliyev, previously a senior figure in the KGB, ruled the country during the Soviet era and became its first president following independence in 1991.

The building, which sits on Heydar Aliyev Boulevard and is located between Heydar Aliyev International Airport and the city centre, was commissioned by the former leader's son and the current president, Ilham Aliyev, who took power following his father's death in 2003.

Saffet Kaya Bekiroglu, project architect at Zaha Hadid Architects, said that the Heydar Aliyev Center represented a break with the country's Soviet past.

"They wanted to have something unique, something which is looking at the future, somehow showing their soft, romantic side but at the same time their optimistic side," Bekiroglu told Dezeen at the prize-giving ceremony on Tuesday night.

"When you look at Soviet era [architecture in Azerbaijan], it's more like monumental internalised authoritarian buildings. So, this, we wanted to use this building as an opportunity to soften it up and totally depart from that."

The 2014 Designs of the Year jury was chaired by writer Ekow Eshun and consisted of architect Piers Gough, industrial designer Kim Colin, journalist Tina Gaudoin and last year's winner, web designer Ben Terrett. All five are based in London.

Last year the top prize was won by UK government website gov.uk. In 2012 it went to the London 2012 Olympic torch, designed by Barber and Osgerby. Design of the Year in 2011 was the Plumen lightbulb while the 2010 winner was a folding plug designed by Royal College of Art graduate Min-Kyu Choi.

Zaha Hadid Architects commented: "The Heydar Aliyev Center is an important educational and cultural building and we are delighted it has won the Design of the Year award.

"The contractor that built the centre won a design-build competition employing ZHA as their architect. This contractor, DiA Holding, are assessed and certified by SGS as complying with OHSAS 18001: 2007, an internationally applied British Standard for best practice in occupational health, safety, and management. The Swiss accrediting authority SGS (Société Générale de Surveillance) is the world’s leading inspection, verification and certification company."