This community viewing platform and play area, designed by Hong Kong architects Olivier Ottevaere and John Lin, provides a loop that rises up to overlook rice terraces carved into the surrounding valleys (+ slideshow).

Located in the village of Tuanjie in China's Yunnan Province, The Sweep was conceived as part of a project initiated by Ottevaere and Lin, who are associate professors at the University of Hong Kong. 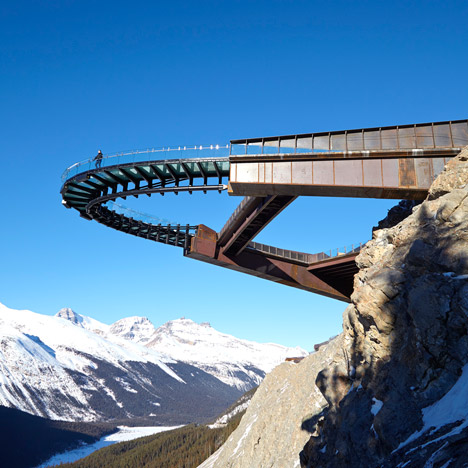 It was constructed with the help of 65 architecture students from the university over the course of just six days, similar to the library and community centre built by the team in the village of Shuanghe, known as The Pinch.

The structure is located at the entrance to a primary school. It functions as a meeting point for parents waiting to pick up their children, but also provides a playground with an inclined surface.

"The demand from the village head and from the local school was to create a waiting and play area for parents and children that responded to the open landscape the site is facing," Ottevaere told Dezeen.

The timber framework was constructed from a series of 12 connected tangential trusses, each with a unique profile that leans against the one ahead of it to create a rigid structural loop.

"The looping structure came from our opinion that such an extensive landscape cannot be framed but should rather be experienced through movement," said Ottevaere. "As you ascend the structure the panorama opens up progressively until you are standing up against the edge and have a full vista of the mountains and rice fields."

The trusses cantilever up to four metres from the connecting points to support a ring of parallel beams positioned around an elliptical opening at the centre.

A slanted deck laid in a linear pattern on top of the beams slopes towards the highest point of the loop, where it flattens out to create the viewpoint.

A circuit of the deck provides panoramic views of the surrounding valleys and farmland from different heights and angles.

Slatted wooden balustrades follow the curve of the outer and inner edges of the loop, with spaces beneath the structure providing shelter from the sun and an exposed courtyard below the hole at the centre.

The Sweep is the second in a series of three experimental timber constructions that Lin and Ottevaere are developing in China, following The Pinch, which features a twisted roof that children can climb on.

"Each built structure is part of a family of experiments in ruled geometry using straight timber elements," added Ottevaere. "Yet they each respond to specific programmatic demands, site conditions and acquire their own typology."