Nendo's designers made the collection of objects for an exhibition with the theme Words, so selected a unit of language in English that has several alternatives in their native tongue. 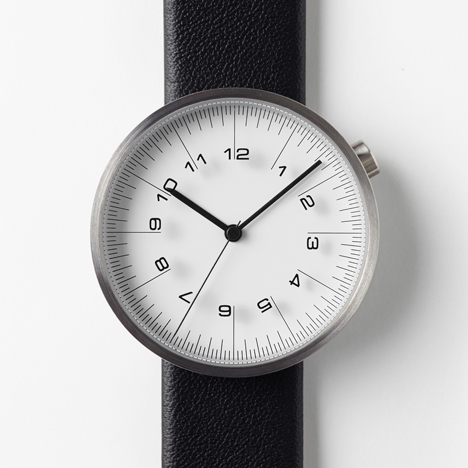 "We chose the word 'rain', but considered its many nuances in Japanese – a language that has dozens of words for rain depending on the condition and time of day – as a way to reflect the fine nuances and sensibilities of Japanese as a language," said the studio.

Each solid Rain Bottle has marks or items suspended in its centre to symbolise the various Japanese words.

A droplet on the end of a branch depicts the "kisame" type of rain. "Kaiu" is manifested as enlarged dust and pollen particles among bubbles.

Leaves, grass and subtle colours give the impression of the rains across the seasons and at specific times of the day.

"By exhibiting 20 different kinds of 'rain', we hoped to express Japanese culture's unique relationship to nature and the depth of this relationship," Nendo said.

The bottles were displayed in a row as part of the Trend Exhibition in Hall 7 at the biannual Maison&Objet trade fair, which concluded yesterday.