Maison&Objet 2014: London designer Benjamin Hubert has developed a carafe that decants wine through a stainless steel aerator to improve its flavour.

Benjamin Hubert designed the WW Carafe and an accompanying set of glasses to expand the range of wine accessories produced by Danish design brand Menu. 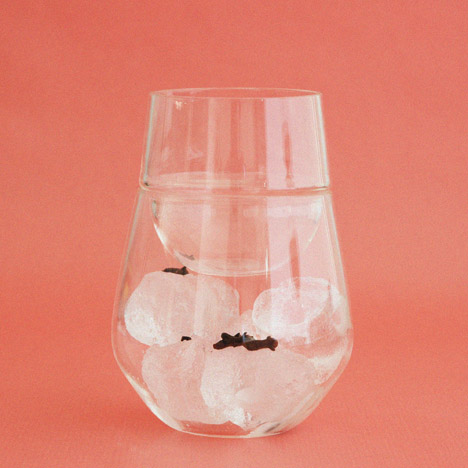 Wine transferred to the carafe drains through a matrix of holes in the base of the steel insert, which is held in the neck of the carafe by an injection-moulded silicone collar.

"The final 'raining' process is both visually arresting and, as the wine is poured from the bottle into the carafe, increases the surface area of the wine by eight times a normal pour from the bottle," said the designer.

As the wine drips through the holes, more of the liquid is exposed to the air, which helps to enhance its flavour.

Wine can then be poured into glasses via gaps around the edges of the collar and the holes in the breather component.

The WW Carafe can also be used to serve water or soft drinks, with the steel insert helping to prevent ice or garnishes from reaching the glass when pouring.

Hubert and his team produced over 20 prototypes during the development process to test the flow of liquid and the best configuration of the holes to optimise aeration.

The resulting carafe and glasses are produced from mouth-blown glass, with the silicone seal fitted by friction to the stainless steel aerator.

The glasses stack inside the neck of the carafe to make the product easier to package, transport and carry to the table.

Menu launched the WW Carafe at the Maison&Objet trade fair in Paris earlier this month, along with a hammer-like nutcracker fitted with a silicone head to catch the broken pieces.