A white spiral staircase that contrasts with the surrounding stone walls is one of several modern interventions that architect Elisabete Saldanha has added to this converted farmhouse in Portugal (+ slideshow).

The house and its former stables are located just outside the city of Guimarães, in a grove of oak, chestnut and cork trees. 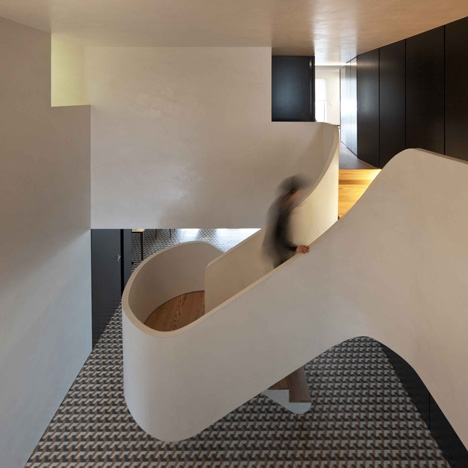 Elisabete Saldanha has transformed the building into a contemporary residence through a series of additions and upgrades.

"The program was created to meet current needs while maintaining its original characteristics," said Saldanha.

"All the historical elements of the building were preserved and restored and even replicated, with a view to creating an identity where the duality between the past and the present coexist in the same space."

The original four-storey house was built across a series of stepped terraces and Saldanha's interventions were designed to fit in with the existing topology and optimise access to the gardens from the various levels.

The buildings form an L-shaped plan, flanking a lawn and a deck that continue around a swimming pool carved into one of the terraced levels of the site. A portico extends from the house's solid stone walls to signal the connection between indoors and outdoors.

A driveway and turning area at the highest terrace provide access to the house's main entrance and to a modern garage and workshop built in place of the original stables.

This building retains the proportions of the old stables and incorporates traditional features such as the sloping tiled roof, but is rendered in a modern smooth grey finish.

A timber-clad section that extends from one end of the annex creates a frame for a large window through which the cars in the garage are displayed.

A grand staircase and porch protruding from one of the house's elevations lead to the main entrance, which opens into living spaces on two levels.

The spiral staircase with marble treads descends from a bright living area on the entrance level to a vaulted space below containing a billiards room.

This space adjoins a living area used as a music room and a bar. Both look onto an indoor lap pool, framed by a curving timber wall.

Throughout the renovation, traditional details like the stone walls and wooden wainscoting were retained where possible and complemented by modern additions.

"On one hand there are elements that preserve and recreate the building's historical memory," said Saldanha, "while on the other hand minimalist traits that are identified with the new users were assumed."

"This results in rich interior details and an interaction between the two languages without giving up the essential user comfort," she added.

This approach is particularly evident in the tower that rises from one corner of the property and contains an office and library space on the top floor, above the living room.

A glazed staircase provides the main circulation in the tower, creating a counterpoint to the stone and intricately carved wood.

Between the annex and the main house, the paving is punctuated by round openings filled in with glazing, which create skylights in the ceiling of a subterranean garden.