Embarking on a mission to capture his home city from above, Vincent Laforet chartered a helicopter on a perfectly clear night and flew 2,300 metres over New York armed with his camera. 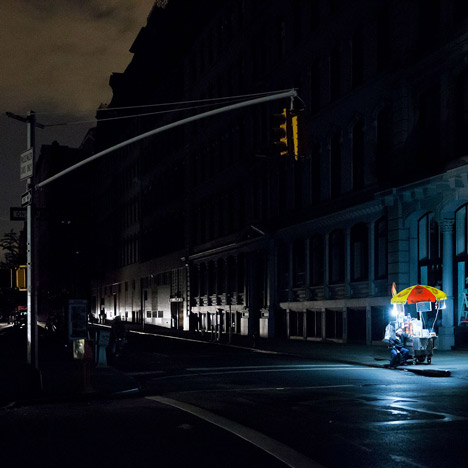 New York after the storm by Iwan Baan

"I've flown several hundred hours around the world – this was the scariest flight," said Laforet, who has previously photographed terrorist attacks and natural disasters. "When you're up that high, you have a lot of time to think of the fact that helicopters aren't the most ergonomic aircraft in the world."

The vantage point above the city allowed him to create images that show how the jumbled roads of Downtown make way for the strict grid of numbered avenues – running south-west to north-east – and streets arranged perpendicular.

"These are images I've been seeing since I was a teenager flying in jetliners landing at John F Kennedy (JFK) and La Guardia airports – I just didn't have the technology available to me to capture these images until very recently," Laforet told Dezeen.

Manhattan is marked out between the dark snaking forms of the Hudson River that separates it from New Jersey, and the East River that forms a boundary between the island and the boroughs of Brooklyn and Queens.

Clearly visible is the cluster of skyscrapers around Midtown, including the Empire State Building, the Chrysler Building, and Rafael Vińoly's skinny 432 Park Avenue – which is due to complete later this year and is already taller than both of the older buildings.

This group can be compared in relation to the dense arrangement of structures on the island's tip, around the pinnacle of the recently completed One World Trade Center: now the tallest building in the western hemisphere.

These giant buildings look like parts of a tiny model in the panned-out pictures showing the city's vast urban sprawl, which the photographer believes makes New York exciting.

"Generally speaking, it's an unavoidable reality of our ever-expanding population. In the case of New York City I love it – the energy and bringing so many people together," said Laforet, who previously worked as a staff photographer for The New York Times.

More zoomed-in images reveal congested roads, and the illuminated windows in office and residential buildings across "the city that never sleeps". The bright lights of LED billboards surrounding Times Square and river crossings are easily identifiable.

Laforet believes that architectural and urban photography can help others understand cities "on a very simple level, by forcing you to stop for a few seconds or minutes and to study them visually".

Other densely-populated centres, including Dubai, Paris, San Francisco, Chicago, London, Shanghai and Hong Kong, are next on his wish list to shoot.

Iwan Baan also photographed New York from above in 2012, capturing images of the city during a blackout caused by Hurricane Sandy that were used on the cover of New York Magazine.

Carlos Ayesta takes a slightly different approach to architectural photography; abseiling down the sides of skyscrapers to capture unusual vistas.