Mexican design studio Peca has launched a collection of candle holders made from marble spheres that can be split in two.

Designed by Caterina Moretti and Ana Saldaña for Peca, the Hauri candle holders are hand-carved from marble into a perfect sphere before being cut in half and re-polished.

A brass band that wraps around one side of the sphere and also extends across the inside surface of each half is also inlaid by hand. Each candle holder takes almost two days to make.

The name of the collection comes from the language of the Huichol people who live in the states of Jalisco, Durango, Nayarit in Mexico. 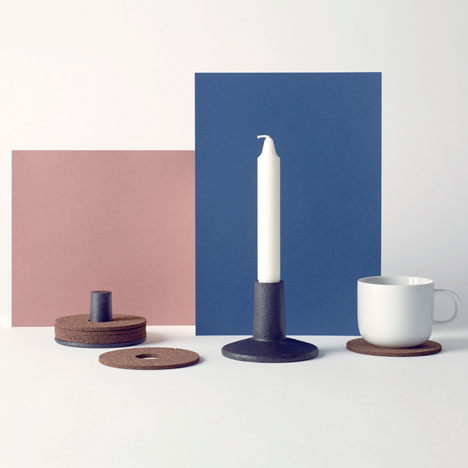 "The word Hauri means light offering," Moretti told Dezeen. "Huichol people use fire in ceremonies to purify themselves and to worship their gods, but they also consider the fire they cook over every day an offering."

"Our Hauri candle holder should remind us that every time we light a candle, we make an offering of respect and devotion to nature and to the unknown," Moretti added. "A connection that maybe we have lost."

The light of the candle illuminates the veins in the marble that make each candle holder unique.

The candles are held in circular niches set into the top of the sphere and into the flat surface of each half. Tubes of brass in different heights are used to line these indents, creating a neck that allows the objects to also be used as a small vase.

Peca is an independent design studio based in Guadalajara, Mexico. Previous projects include Lava Plates made from half-polished volcanic stone.