The concrete facade of this housing block in Lausanne, Switzerland, features four different surface finishes to create a patchwork effect that hints at the building's complicated internal layout (+ slideshow).

This led 2b Architectes to develop a building intended to combine contemporary details and finishes with traditional proportions.

The facade was divided up to reveal which parts belonged to which home. Some parts were cast against timber boards to create a grained texture, while some sections feature a smooth surface. 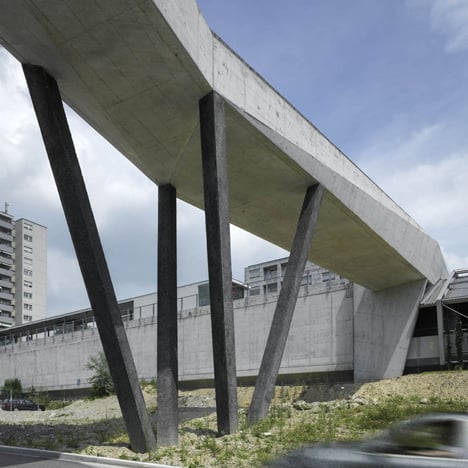 A mineral wash was also applied in some parts to create a gritty texture designed to resonate with the ground surface.

These surfaces are punctured by square windows in two different sizes. Some sit flush with the concrete, while others are slightly recessed.

"The compact building with its punctured window holes reinterprets characteristic qualities of the 19th-century buildings," said 2b Architectes, which is led by Stephanie Bender and Philippe Béboux.

"Since the concrete surfaces of each individual apartment are treated differently, the typologically interwoven character of the interior can also be perceived on the exterior."

Named Urban Villa Beaumont 4 in 1, the six-sided building was completed in 2011. At its centre is a small square courtyard that accommodates the entrances to all four homes inside.

Unlike the facade, the walls fronting the courtyard are glazed to bring light through all parts of the building.

Four huge letters hang down from overhead, spelling out the word ROOM.

"The communally used covered interior atrium at the core of the solid construction guides daylight inside the building," said the architects.

"This acts as a point of reference for the floor plans of the four interlocking residential units."

All four of the homes contained in the building are significantly different. Rather than each having a floor, or a particular side of the building, they spiral up around each other via a double-helix staircase that surrounds the central courtyard.

Two of the homes each have three bedrooms plus their own ground-level parking space, and there is also a one-bedroom home with large flexible living spaces and three parking spaces.

The fourth home is a large family unit with four bedrooms, which takes up the entire upper floor as well as spaces on the lower levels.

"The principle of the floor-plan concept combines the advantages of individual living with communal togetherness – an innovative and well-conceived answer to urban densification that revitalises the idea of living together," added the architects.

All four homes also features a private terrace on the ground floor, screened from prying eyes by concrete walls.

Photography is by Roger Frei, apart from where otherwise indicated.