Graduate shows 2015: garments distorted with wire rods and shoes made of sponge were among items that stole the show at this year's London College of Fashion graduate presentation, according to Dezeen's Dan Howarth.

London College of Fashion's show took place on Monday in a former industrial building at Blossom Street studios in east London, across the road from an exhibition that displayed the work of accessories, marketing, costume design and photography students.

Many of the students worked in pairs or groups for their final collections, mixing specialities from departments including fashion design, textile printing, millinery and jewellery design. 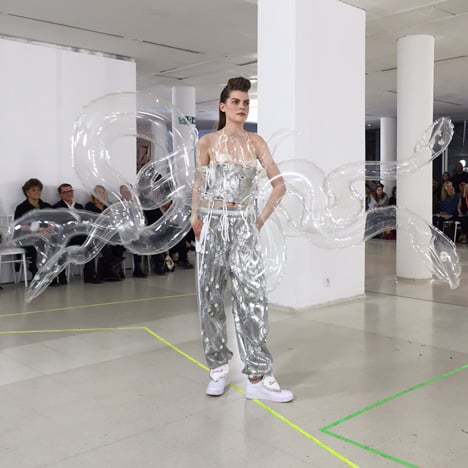 This year's graduates presented more restrained collections than their counterparts at the Royal College of Art and Central Saint Martins, but still experimented with unusual materials and construction techniques to create eye-catching effects.

Read on for Dezeen's favourite collections from the show:

Fabrics printed by Camila Lopes were held up using wire rods and strings to create the distorted silhouettes of Catherine Wang's garments, which were intended to look like "artwork hanging on the body".

"I used metal rods strings to bring in the concept of kinetic art," Wang told Dezeen. "The construction of the clothes is adjustable, they aren't meant to be one specific form."

Screen printing, hand painting and acid dyes were all use to create the colourful patterns, which each took up to five days to complete.

"[Acid dying] is a time consuming and a difficult medium to use as it can be very unpredictable and it requires plenty of testing to get colours right," Lopes said, "but I was determined to use it because acid dyes provided the best and most vibrant colours."

"I projected different forms – squares, triangles and circles – onto the wall at different angles," said Mok, who then used the resulting shapes as the starting point for his garments.

Working alone rather than in collaboration, he also created shoes from blocks of speckled sponge that were held onto the bottom of models' feet with straps or stuck to red socks.

"I just wanted to f*ck the idea of shoes and to take another look at the meanings that they have already been given," Mok told Dezeen.

"One of the main protests that I was researching was the Umbrella Movement in Hong Kong in 2014," said Lau of the influence he took from events in his home city.

The dark blue and contrasting orange silks that hung from the flags were printed by textile student Angela Domale, who based the patterns on differences in skin pigmentation.

"I created the flags using print techniques like devore, cross dyeing and screen printing," said Domale. "It gave them a transparent effect and added more depth to the fabric, as you could see two layers of the woven fabric and the prints on both sides."

"Although at first glance the hats have an angular and clean aesthetic, for me they mean much more," Britton told Dezeen. "The use of a low brim to cover the face represents our ignorance, and the material choice of skins represents nature and what we stand to lose if we don't take action."

Shuangshuang Wang's heavy acrylic and flocked wood jewellery, which also accompanied the collection, was based on unusual human forms and designed to magnify parts of the wearers' bodies.

"My transparent jewellery pieces reflect all the lights and shine under any circumstance, and my flocked bangles have a gentle texture similar to skin," Wang said.