Car brand MINI has relaunched its visual identity, unveiled a new version of the MINI Clubman estate and embraced the "sharing economy" by offering every customer the chance to rent their vehicle to others when they don't need it (+ slideshow).

At a launch event in Berlin today the brand unveiled a new, minimal logo and announced that all MINI owners will be able to pool their car via the DriveNow car-sharing programme.

"We are now the first car company that is going to offer this car-sharing option as a possibility for each customer when they order their car," said Peter Schwarzenbauer, board member of MINI parent brand BMW.

DriveNow has previously allowed people who don't own cars to rent a vehicle, but MINI's new concept brings Airbnb-style sharing to car owners for the first time. Owners will be able to make money by offering their cars to rent to anyone, or set up a private network of friends and family.

"Whenever your car is not needed because you're on vacation or away, you can hand over your car to our car-sharing concept so your car can work for you and make money for you," Schwarzenbauer said. 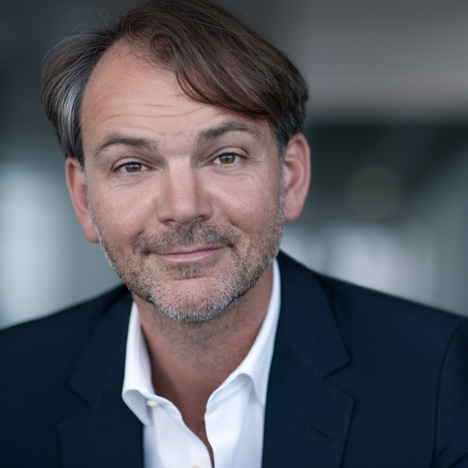 The new logo is a "flat" monochrome version of the double-winged symbol that dates back to the 1980s and will be used on screen and paper. The vehicles themselves will retain the three-dimensional version of the logo.

The logo will be accompanied by a new serif font called MINI Serif.

"We are relaunching the brand's visual identity," said Schwarzenbauer. "The logo is reduced but easily recognisable as MINI. Our new typeface exploits the tension between tradition and a modern cut."

"We are bringing a little more of a heritage-feel into the actual script and at the same time flattening the logo," Anders Warming, head of design at MINI, told Dezeen. "It just kind of gives it that special ring, it looks like we are entering a new era."

"Something that is very important for us is that MINI will never stand still," he added. "We keep reinventing the cars, in a way, but we know where we come from."

Schwarzenbauer said that customers would increasingly be able to personalise their vehicle in line with the rising demand for bespoke products that can be customised prior to purchase via online tools.

"The trend for customising your car is really increasing," he said.

The car-sharing option will be available in the US from 2016 and later in other cites that have DriveNow networks. "Peer-to-peer car sharing" among friends and family will become available after that.

The relaunched MINI Clubman retains the barn-style split rear doors of its predecessor but brings the brand into the premium compact class, aimed at higher-income customers.

"There was that beautiful car missing in that segment," said Warming. "The car that you can just stand and look at in your driveway, but at the same time, it's your family car."

The new logo and font have been developed in collaboration with German branding agency KKLD. MINI confirmed that the logo follows the principles of "flat design".

"A 'flat design' 2D logo has been developed from the existing 3D logo for high recognition value," said the brand in a statement. "The logo stands for itself, with no imitation of material or shape."

MINI said its serif font "was developed from a typeface manually-set by Swiss designers used in publishing and given a modern cut."