The walls of this extension to a house in Melbourne feature a mismatched pattern of bricks and roof slates, sourced when part of the original building was demolished (+ slideshow).

Designed by Melbourne-based Phooey Architects, Cubo House is a new two-storey rear extension and basement for a couple with two young children.

It provides more space for family and visiting friends, but also improves a cluttered existing layout.

The clients requested that recycled materials be used wherever possible. Other Australian buildings taking a similar approach include a warehouse-like residence built from second-hand bricks and a cafe with wall panels made from old doors.

"They were committed to sustainability, including the adaptation and reuse of artefacts that could not be retained during the demolition and construction," told Dezeen.

"It shows that new additions to old buildings can be a delightful mix of new, old, and somewhere in-between."

Square sections of the demolished bricks were laid in alternating directions, inspired by the Surrealist collage technique of cubomania, which involved cutting images into cubes and rearranging them randomly.

"Demolition drawings of the existing rear facade were cut up into equal squares and rearranged in a Surrealist cubomania manner," explained the architects.

"Together with the owners, this mish-mash of squares was then tinkered with over time as the project evolved to produce the final pattern."

Other discarded elements of the house were also reused, including metal security doors for the awning around the rear window and roof slates for the windowsills, as well as some sections of the rear facade. 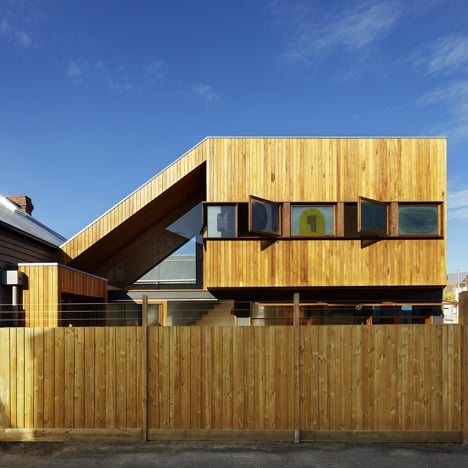 "Besides the environmental benefits, we are entertained by the opportunity to upcycle banal and discarded waste into desirable and purposeful additions, to celebrate the memory of the existing building," said the team.

The extension adds approximately 100 square metres to the two-storey house, increasing its size by half. On the ground floor there is a new open-plan kitchen and dining area at the back, plus a laundry room and powder room, and on the first floor there are two new bedrooms and a bathroom. A children's playroom, storage, and a guest bedroom with an en-suite bathroom were also added in the new basement.

In the centre of the house, walls and floors were removed to create a triple-height stairwell that connects all levels, stretching nearly 11 metres from top to bottom.

"Originally, you entered the house through a dark, stuffy corridor under the staircase," said the architects. "In its place, the new welcoming entry foyer now opens up to a sun-drenched multi-level void with natural ventilation."

Landings on all three levels were designed as generous, multi-functional spaces.

Leftover stair balustrades were also reused as cabinet handles in the kitchen.

Polished, exposed aggregate concrete was used for the flooring, which extends outside beyond a wall of steel-framed glazing to make the indoor and outdoor spaces feel more like one.

"Melbourne is either stiflingly hot or bitterly cold for much of the year, so it's ideal to have interiors that can be fully enclosed, but still connect strongly with the garden," said the architects.

Outside, benches and a barbecue area are covered in reclaimed hardwood boards, which are laid in alternating directions, similar to the bricks.

"The same cut-up technique guided the design for new elements, with salvaged timber flooring cut up in a square grid to become internal and external joinery details," said the architects.

The 55-square-metre garden was designed in collaboration with Simon Ellis Landscape Architects, and features a bike shed at the back, plus a patch for growing strawberries, vegetables and herbs.

"It is a small, child-friendly garden filled with as many interesting and sustainable features as a large garden," said the architects.

"It has a diversity of materials, strategically interwoven to enable function, fun, tranquility, and a flexible transition between inside and outside."

Photovoltaic cells and solar thermal panels are concealed on the roof of the rear extension to provide hot water and electricity for the family.

Tanks are installed underground to store rainwater, which is captured and used to flush toilets and water the garden.