Japanese studio YUUA Architects & Associates has slotted a house into a 2.5-metre-wide space between two existing buildings in Tokyo.

The rooms of the four-storey-high residence have a width of just 1.8 metres, hence its name: 1.8m Width House. This forced Madoka Aihara and Toshiyuki Yamazaki – the two principals of YUUA Architects and Associates – to plan the interior very carefully.

Their response was to use split-level floors to create natural partitions between different spaces. This reduced the need for walls inside the house, helping to make small rooms feel more generous.

"In this project, we have considered the house as an aggregation of small 'places' and designed a space where such 'places' expanded in various floor levels," explained the pair. "Floating floors in long and narrow space generate the spatial expanse."

The house accommodates a single resident and a cat in Toshima Ward, the densest municipality in central Tokyo. Like the central areas of many Japanese cities, the lack of space has resulted in an increase in narrow houses – referred to as eel's beds or nests.

The biggest issue with these kinds of properties is ensuring plenty of light penetrates the interior, which is why architects often include double-height living spaces and high-level windows in their designs. Recent examples include a 3.4-metre-wide house in Osaka and a 2.7-metre-wide house in Shiga.

"This small and narrow piece of land is a typical 'eel's bed' site, where one can reach his or her arm from the left wall to the right wall, as buildings stand very tight and compact next to one another," said the architects. 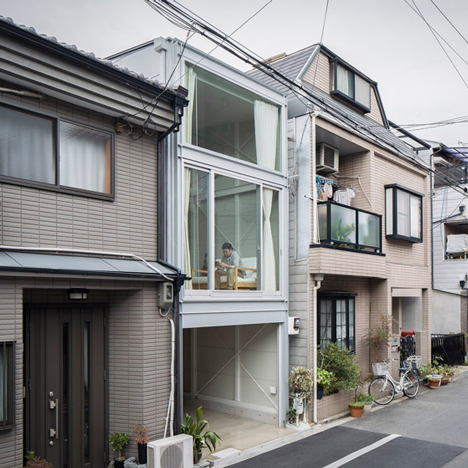 "We have tried to reserve as much space as possible as well as to provide psychological openness for the resident. Light and fresh air, which has been taken in from openings in the frontage and upper side of the building, flows into every corner of the house, utilising the floor difference."

There are four main storeys inside the building, each divided into two floors. A staircase at the back connects the three uppermost levels, while small sets of stairs in the centre of the building create routes between the lower floors.

Both staircases comprise steel treads without supporting risers, which allow light to filter through. Slender handrails run down alongside.

Instead of using a light colour scheme, the internal walls were painted dark to "give a sense of depth" to the space, while floors and ceilings were covered in scaffolding boards to offer texture.

This adds emphasis to the window wall that fronts the building – it becomes the focal point on every storey.

The occupant shares the house with a cat. The main living space is on the second floor, where a kitchen counter extends out to create a dining table. It also provides a platform for a ladder leading up to terraces on the level above and the roof.

A loft room, a washroom and a bathroom are also located above the living room. The bedroom and a study space can be found on the level below, and the lowest floor functions as a storage area.

The house has a steel frame, but there are few traces of this within the building.

"The structural design was developed by fully considering the singularity of the building shape," said Aihara and Yamazaki. "Columns and beams were limited to maximise the interior space."

Photography is by Sobajima, Toshihiro.