A timber sunshade folds in on itself to form a balcony for this nautical-inspired house overlooking the Mediterranean sea near Saint-Tropez, designed by London architecture office Jak Studio (+ slideshow).

The property is located on a sloping hilltop site in the village of Les Issambres, 22 kilometres from Saint-Tropez.

It was designed by Jak Studio to provide a holiday home for a British family, and features a glazed rear facade to maximise sea views.

"By far, the owner's biggest desire was to celebrate the postcard view of the sea," architect Kenan Klico told Dezeen.

"The house has been designed so that almost every area benefits from the outlook towards the bay of Saint-Tropez."

The rear facade of Villa Brash, which takes its name from the owner's surname, has an oak brise-soleil that folds in on itself to form a balcony for the bedrooms, similar to a viewing deck on a ship.

"A nautical theme emerged during the design process, inspired by the nostalgia of vintage cruise ships," said Klico.

"We also used oak for the sunshade because it will weather naturally to a grey colour over time, adding a softer element of unpredictability to the facade."

Oak slats also wrap around windows at the western side of the house to shield the living space inside from afternoon sun.

The architects also added textured ceramic tiles, reminiscent of rough dry-stone walls in the area, while U-shaped terracotta roof tiles used for the house and garage were reclaimed from the local area.

"The aim was to create a beautiful, tranquil retreat with a contemporary style, which also fits in with the more rustic Mediterranean style of surrounding houses," said Klico.

The two-storey house has its entrance and three bedrooms on the upper level, along with an open-plan kitchen, dining room and living space, plus a fourth bedroom on the lower level.

The layout was designed to lead visitors to the view gradually as they arrive through a series of half levels.

The blank facade at the top opens up to a five-metre-tall expanse of glazing at the rear once inside, immediately showing off the view upon entering.

Stairs then lead down to the living space on the lower level, and then the kitchen and poolside terrace a half level lower, and finally to the garden at the bottom of the sloping site.

"Sequencing was key for this house," said Klico. "After the initial surprise of the view, the gradual descent directs people to slowly discover all aspects of this house and its location." 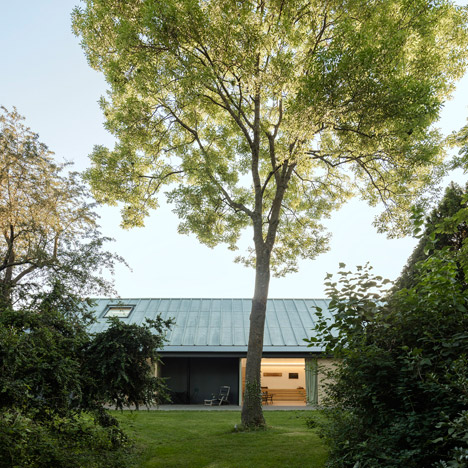 A similar technique of contrasting blank entrances with dramatic views also features in other recently completed seaside homes, including a Californian house overlooking the Golden Gate Bridge and a Chilean house that sprawls in three directions to catch the best views.

To make the indoor and outdoor space feel more connected, the architects used the same materials in the double-height living space as they used outside, including oak to line the walls and stone-effect ceramic tiles for the flooring.

"The biggest challenge in terms of design and execution was to create a fine balance between the interior and exterior space," Klico explained. "Crossing between the two had to feel seamless."

The oak-lined walls were also added to reinforce the home's nautical theme, which is continued upstairs where bedrooms have been conceived as cabins, with each opening up to the balcony.

The bedrooms are accessed by a corridor with a rooflight running along its length to bring more light into the northern side of the house.

"The rooflight was designed to act like a 'building clock' to help the owners tell the time throughout the day, and can also be used to provide cross-ventilation through the house," said Klico.

An infinity pool at the back of the house offers eye-level views of the horizon while swimming.

"Nature was the driver behind the design of this villa," said Klico. "The play on light throughout the day, and how it connects with its setting, are the true embellishments here."