British inventor Dominic Wilcox has designed a series of playfully absurd breakfast accessories for Kellogg's to encourage children to eat in the mornings (+ movie).

The set of seven items also features a soggy-o-meter, an energy-detecting spoon, a wireless talking pillow, a head-mounted crane that serves cereal, and a Snap, Crackle and Pop speaker.

Intended to catch out anyone that has skipped breakfast, the Hungry Tummy Rumbler has a built-in microphone that attaches to children's waists and connects to a giant amplifying orange brass horn.

"My first sketch was just a little person with some huge horns attached," Wilcox told Dezeen. "With my drawings I'm trying to explain the idea in the simplest and most direct way possible. I tried to make these objects so that you could understand them visually before you even use them." 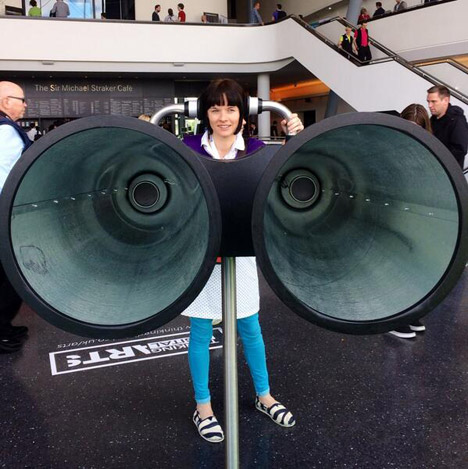 Binaudios by Dominic Wilcox encourage users to "listen to the city"

The oversized nature of the design is similar to Wilcox's giant pair of audio binoculars that let users "listen" to places around Newcastle.

"I'm a fan of doing horned objects," he added. "What I like about them is they communicate sound visually. If it was an inbuilt speaker in a minimalist design it wouldn't visually communicate, and your brain would have to think about what it is."

The Soggy-O-Meter bowl – which Wilcox designed to look like "a fairground attraction" – keeps track of the breakfast eater's cereal, with a light-up dial and alarm to warn when it's reached peak saturation.

Although the bowl has a lot of functions, Wilcox purposefully disguised the technology behind it. "I like technology which is hidden and adds a bit of magic," the inventor said. "Technology on its own is really boring, but it's what you do with it to enable a bit of surprise. I like hiding it away behind the scenes."

"You don't need to be minimal and sophisticated like we adults love to pretend to be, so it was about making vibrant coloured objects for a start. In terms of the design a lot of it is about function, and the forms following the function."

For less energetic breakfasters, the Breakfast Is Served pillow allows families to communicate wirelessly from room to room using a built-in speaker.

Cereal can be transported from box to bowl with the Crane Head Cereal Serving Device, which incorporates a hydraulic milk dispenser and is worn on the head of the wearer controlling it.

Breakfast can also be served by the Robowl – a quadrocopter drone controlled by a watch, which can deliver breakfast and also help pack school bags with its robotic hand extension.

The Get Enough spoon uses a light-up indicator to show the amount of cereal that's been eaten. A pair of eyes at the top of the spoon open and close, depending on how much "energy" the spoon has gained.

The utensil is a rare example of Wilcox's use of 3D-printing, a process that he's expressed his concerns about in the past. In 2012 he battled a 3D printer in a competition to build the fastest and most accurate model of the Duomo cathedral in Milan.

"I've resisted, or not found a need, for 3D printing much at all, in everything I've done, but that was an example of something I decided needed to be 3D-printed, because that was so precise and everything needed to fit perfectly," he said.

The purposefully absurd yet useful nature of the objects is typical of Wilcox, who in the past has designed a nose-mounted phone stylus, a driverless stained-glass car, and a reverse-listening device.

"In every piece of work I'm trying to communicate ideas in the clearest way possible, so there's nothing really on the objects that's not functional," he said. "There's not a great deal of decoration, they're very clear objects."