Beijing architect Cao Pu has created a compact hostel in a traditional hutong courtyard that gets even smaller when its front wall is rolled back to provide extra external space (+ slideshow).

The 12-square-metre Humble Hostel is located in Beijing's historic Dashilar neighbourhood – one of the city's few remaining areas of ancient alleyways and courtyards known as hutongs.

Traditionally each courtyard was owned by one family, but most properties are now divided up so a mix of occupants share the communal space in the middle. Many of the old buildings that have been spared destruction to make way for contemporary housing are also being turned into boutique hotels and coffee shops.

This has led to disputes between residents over architectural alterations and disagreements about space.

Humble Hostel was conceived by a group of young people who proposed turning derelict hutong structures into temporary accommodation that could also provide space for its neighbours.

The courtyards are usually taken up by kitchen areas, bicycle parking and junk, so Archicao founder Cao was asked to come up with a solution that would "give back" space. 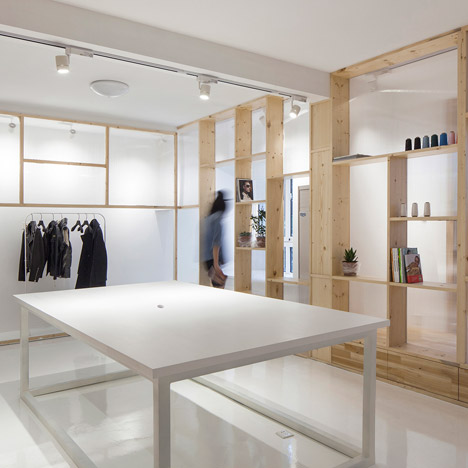 "The arrival of the young people would serve to further congest the yard, so we needed to find a way to live peacefully with the neighbours," said Cao, who has previously converted an apartment in Nanjing into a fashion studio.

His solution was to install a sliding wall on the front of the hostel. This can roll back while visitors are out exploring during the day.

Made up of windows, a door and storage cupboards, the wall is are mounted on tracks along the ceiling and floor.

When retracted, a small white-tiled area creates enough space for a small table and chairs or several bikes.

"When there are not many guests at the hostel, some space can be given back to the yard by sliding the doors around to 'compensate' for the area already occupied by the kitchens, and when the hostel is full there is still enough space to accommodate all guests," Cao said. "This will create breathing space in the chaotic hutong yard life."

The hostel is the first prototype for the design and accommodates three guests in single beds. One of the beds is attached to the moving partition above a desk – both are folded away with the wall when not in use.

Another is located against the far wall, while the third sleeping area is located on a static platform beneath the roof, which the partition slides beneath. A small bathroom is housed in a curtained cubicle.

Finding a location for the first trial of the hostel design proved challenging, according to Cao.

"Many interesting stories happened during the whole process, including the change of the construction site, being forced to stop work and even modifying the original design due to sick, complaining and uncooperative neighbours," he said.

The prototype is now complete, and is being tested by both visitors and the local residents – who have already made suggestions as to how use the extra outdoor space. 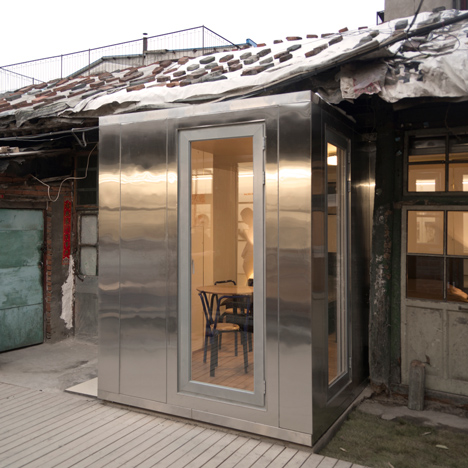 "One of the neighbours has happily agreed to use this place for calligraphy painting during the daytime," said Cao.

The hostel is one of several Dashilar pilot projects that form part of the programme for Beijing Design Week, taking place across the city from 24 September to 1 October 2015.

Another of the pilot projects, unveiled last year, uses a panelling system to building temporary living spaces in the hutongs.

Beijing firm MAD has previously extended a hutong house with a series of metallic bubbles, while local studio Instant Hutong has charted the disappearing neighbourhoods with lenticular maps.

Photography is by Cao Youtao.