Japanese architect Sou Fujimoto provided the influence for the Spring Summer 2016 collection by Swiss fashion house Akris, which includes garments based on his buildings and sunglasses that mimic his eyewear.

Fujimoto's designs, including his blue glass shopping centre in Miami and the latticed 2013 Serpentine Gallery Pavilion, have been reinterpreted as outfits for the brand's latest collection.

Akris creative director Albert Kriemler met the architect while he was working on the Université Paris-Saclay, after being introduced by photographer Iwan Baan.

"I have been admiring Sou Fujimoto's work and his unique approach to architecture for quite some time," said Kriemler.

"There are architects whose vision is close to what fashion really is about – creating a relation between the body and the environment that helps human beings to live comfortably," he added.

"Sou is an architect who understands that we have more senses than just the eye."

Presented at the Grand Palais during Paris Fashion Week, each of the 49 looks in the collection is based on an architectural work.

The outfits were organised into small groups that represented specific projects, with some of the references more direct than others.

The show opened with a collection of black and white garments peppered with different sized holes, based on the gaps in the roof of Fujimoto's proposed House of Hungarian Music.

Images of the tree-filled House N were printed onto a shirt, trousers and a tunic made from silk crêpe, as well as an organza parka. Dresses made from strips of cork echoed the building's wooden floors.

A replica of the house, which features large punctures in its white facades, was also built at the top of the catwalk. 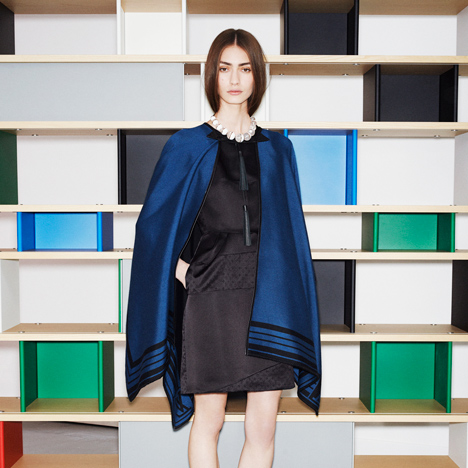 One set of garments was based on Fujimoto's red-ink sketches, which were recreated using a tweed pattern, and drawings of his 2013 Serpentine Gallery Pavilion were applied to a white tunic, T-shirt and bag.

The pavilion also influenced garments covered in a grid of shimmering square paillettes.

A tree-inspired tower in Taiwan – currently on hold due to safety concerns – was interpreted as translucent cotton knitwear with emphasised vertical lines.

The architect's other projects turned into clothes as part of the collection included the Naoshima Pavilion and Setonomori Houses in Japan.

"In Sou's work, I recognise a desire to comprehend and create volume, space and room, to intertwine nature and construction, to work with transparency and opaqueness that rings familiar to me," Kriemler said.

Even the accessories were influenced by Fujimoto – his signature spectacles were turned into mirrored sunglasses worn by all of the models.

Other architects that have influenced a fashion collection include Modernist Charlotte Perriand, whose life and work were referenced in a range by Louis Vuitton.