Thin layers of oak veneer make up the three-piece wooden frame of this bicycle designed by student Niko Schmutz (+ slideshow).

The frame makes the most of the "resilient" properties of wood, and has been designed to absorb vibration and lend the vehicle a "spring effect" on uneven urban roads.

According to Schmutz – a student at the School of Design at Pforzheim University in Germany – wood is similar to metal in terms of rigidity, is less susceptible to cracking or denting, and also offers a longer lifespan. 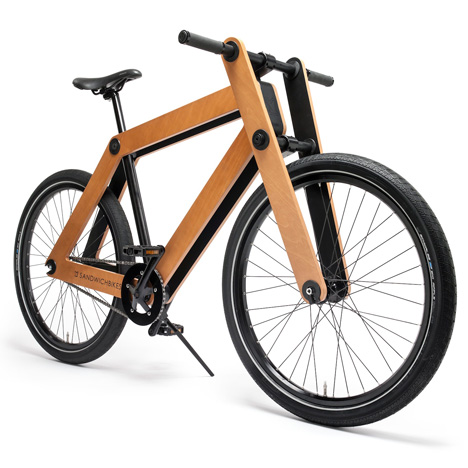 Three concentric diamond-shaped strips of wood, reminiscent of the patterns of tree rings, make up the core of the bike.

Alternating matt and gloss aluminium elements, such as the front fork – the two blades that hold the wheel – are seamlessly attached to the wooden frame. A tube extends up through the top of the wooden pieces to support the seat, and both saddle and handlebars are covered in leather.

The bike takes its reference from the so-called dandy horse bikes of the early 19th century, which also featured wooden frames – although the designer sees wood as a material of the future, rather than the past.

"In addition to high quality and durable materials like aluminium, steel, carbon and titanium, nearly no other material is justified on the bicycle market today," said the designer. 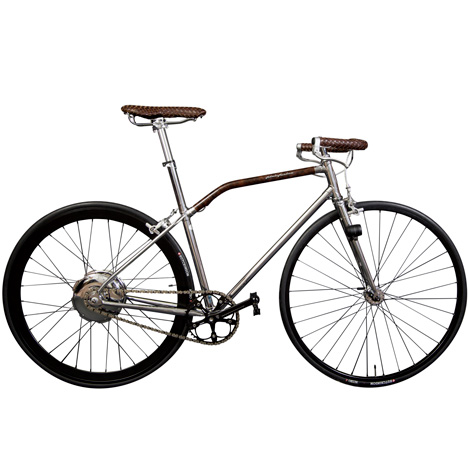 "If you analyse the market, you discover that the wooden bicycle with the original materiality of the wood is increasingly being produced again and should be established in the market," he added.

As the designer acknowledges, he's not the first to propose a design for a wooden-framed bike, with manufacturer AERO creating a prototype similarly constructed from layers of birch.

Amsterdam designer Paul Timmer instead chose solid ash for his design, which was paired with 3D-printed aluminium parts, while furniture manufacturer Thonet used its traditional steam-bending processes to create a slender beech frame.