Los Angeles-based Lorcan O'Herlihy Architects (LOHA) has restored and updated the Julius Shulman Home and Studio in the Hollywood Hills, where the influential photographer lived for six decades (+ slideshow).

Composed of a series of steel and glass boxes, the 4,000-square-foot (372 square metres) dwelling is situated on a property that overlooks a nature preserve.

Built in 1950, the house was designed by architect Raphael Soriano, whom Shulman had commissioned.

Soriano, who died in 1988, was a noted Mid-Century Modern architect who helped pioneer the use of modular, prefabricated steel and aluminium in residential and commercial projects.

The Shulman Home is one of 12 remaining built Soriana projects, and it is the only one with an unaltered steel frame. The City of Los Angeles designated the property a Historic-Cultural Monument in 1987.

"It was a great opportunity to engage an excellent design by Raphael Soriano," said founder and principal of LOHA, Lorcan O'Herlihy, when asked about working on the project. 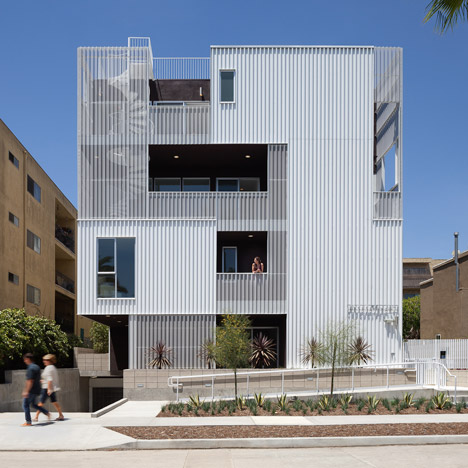 "As the last remaining steel frame house by Soriano, this home reflects a vital moment in the history of architecture, especially in Southern California."

"I have many fond memories of visiting Julius there, so it was personally a very important project to me," O'Herlihy added.

Shulman – one of the most influential architectural photographers of the 20th century – is well known for his iconic images of Modernist homes in California. He photographed buildings by many illustrious architects, including Pierre Koenig, Charles Eames and Richard Neutra.

The photographer lived in the dwelling until he passed away in 2009 at the age of 98.

When new owners acquired the Shulman Home in 2010, they hired LOHA to restore and update the home to meet the needs of a young family.

The building was not in great shape: plywood panelling on the interior was peeling off, the bathroom and kitchen were outdated, and the heating system needed to be replaced.

"Considering the condition the house was in when we got the project, the main challenge was to recognise and restore the historically significant features while at the same time providing a home for the new owners, contemporary to the way we live now," O'Herlihy told Dezeen.

The firm conducted extensive research into the materiality and design intentions of the original building, as well as other architecture from the same period. The home was restored under strict preservation guidelines by the city's Office of Historical Resources.

"Due to the home's status as a residence and not a museum, we were granted more flexibility in upgrading the residence with essential contemporary features and important amenities," said LOHA.

The firm used a "sensitive and light approach" in order to bring out the timeless and elegant quality of the original design. The firm matched original materials wherever possible, and preserved "key experiential moments," such as the all-cork entry sequence.

"One of my favourite features is right when you walk in, when you're greeted with the all-cork entry, which was a part of the original Soriano design," said O'Herlihy.

Shulman popularised the indoor-outdoor California lifestyle in his photographs – and his own home, with its series of screened-in patios, embodied the same spirit.

LOHA restored the patios' aluminium framing and sliding glass doors, and added a system of adjustable screens behind the glass.

"The transitional spaces created through these screened-in patios were a key aspect of the Shulman family's enjoyment of the home, and a pivotal element of the architectural legacy, which the new owners continue to honour," explained the firm.

One change to the original home was the replacement of existing built-in storage and furniture. LOHA introduced custom cabinetry and woodwork, including an integrated shelving system and cantilevered bench.

Small, energy-efficient heating, ventilating, and air conditioning systems were integrated into the cabinetry, "creating sustainable climate zones that eliminated the need for a centralised cooling system that would have interrupted the home's flat roof line", said the firm.

The kitchen and bathrooms were fully redesigned, and all plumbing and water heating systems were updated "to exceed current standards".

The firm removed shag carpeting and poured a new concrete floor. It also reconfigured the home's layout to create a guest bedroom and added a skylight over a hallway.

The Shulman Home is the latest in a growing portfolio of renovation and adaptive reuse projects by LOHA. The firm has renovated two Richard Neutra homes in California and updated an 1847 coach house in Dublin.

Other projects by LOHA include bus shelters in Santa Monica, California, and a multi-family housing project in West Hollywood.