The Corridor House is a series of plywood modules, staggered and layered to create a puzzle-like dwelling with a courtyard in the centre. Each unit is designed to resemble a corridor.

The modules measure five by 10 feet (1.5 by three metres), a standard size for plywood sheets. Each one rests on a round pier that appears to extend through the roof with a chimney-like form.

Though the spaces are relatively small, they are large enough to hold an individual bed, a desk, or a lounge chair. For the biennial installation, the structure has been sparsely furnished.

Each module has a slanted roof, which when paired together forms the iconic shape of a house, like a Monopoly game piece. The units can be arranged in a number of ways to create different structures or housing types. 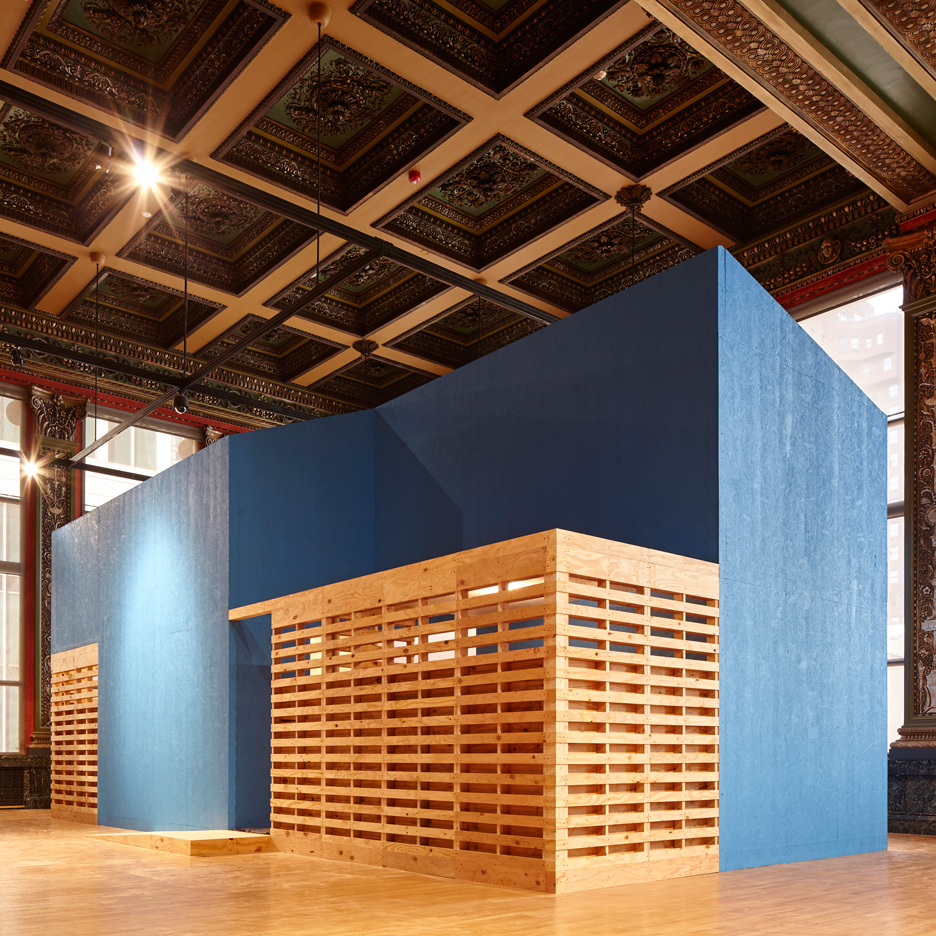 The house "is one variation among many: an assembly of parts that are both technical and archetypal," according to a project statement from MOS principals Hilary Sample and Michael Meredith.

"It vaguely resembles the strange figures of suburban corridors along with the openness of a [Mies van der Rohe] courtyard house," they added.

The MOS project is one of four full-scale residence on view at the biennial, which also includes a low-cost house by Tatiana Bilbao and a prefabricated structure by Vo Trong Naghia.

While the other two dwellings directly address affordability, the Corridor House is meant to suggest the possibilities of everyday materials and the spaces people pass through but often overlook.

The modules could be easily shipped or combined with other structures, permanently or temporarily.

"It's repetitive. It's made of parts. It's casual. It's almost familiar. It's nothing in particular. It fits on a truck," said the architects.

The first Chicago Architecture Biennial includes more than 100 firms from around the world, presenting projects including an installation by Sou Foujimoto repurposing everyday objects and a latticed archway by SO-IL.

MOS Architects have designed a number of projects around the world, including a floating house on Lake Huron in Canada and an art school in Denmark.

Photography is by Michael Vahrenwald/ESTO.