The Australian Institute of Architects has named 46 winners in its annual awards, ranging from a brightly coloured hospital to a house split up into a "village" of blocks and a new home for the Melbourne School of Design (+ slideshow).

Australia's National Awards for architecture recognise the best examples of contemporary architecture across 14 categories, including one for international projects. This year the awards, which have been running since 1981, received more than 860 entries.

The jury was chaired by the Institute's last president David Karotkin and selected the projects from a shortlist of 185 regional AIA Chapter Architecture Awards winners that were announced earlier this year. 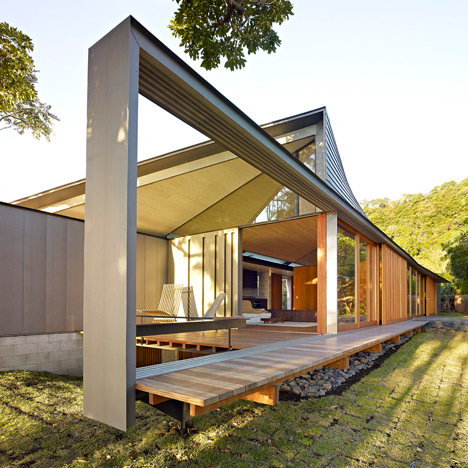 Winners include a rememberance monument in Melbourne, which has taken 15 years to deliver, and a "very small, neglected barn" in Hobart that was converted into a family home. Called #thebarnTAS, the renovation won both the main prize for a small project and a heritage award.

"The historic structure has been lovingly retained – even its original shingles have been scrupulously cleaned and now form a ceiling to the upper mezzanine bedroom," said a statement from the jury. "This is an excellent example of how the limits and challenges of heritage and conservation can encourage inventive solutions."

A rammed-earth equestrian centre was among the commended projects, as was Medibank, an office building conceived to be the healthiest workplace in the world, which also named office interior of the year at the Inside Festival this week.

The winners were announced on November 5 at a ceremony at the University of Queensland Advanced Engineering Building in Brisbane, which won three AIA awards last year.

In March, the AIA named "lyrical technologist" Peter Stutchbury as the 2015 recipient of its gold medal, the country's most prestigious architecture award.

The full list of winners from the AIA National Awards: