Encompassing 5,000 square feet (465 square metres), the showroom is an extension of Versace's headquarters in New York, which overlooks Central Park.

The showroom was designed for the display of the brand's multiple fashion lines and for its wholesale operations. It is also used as a venue for meetings and collaborative work sessions.

"The space was envisioned as a highly flexible environment that could be easily reconfigured to showcase the label's many styles, tones and material languages," said SO-IL.

The firm created a series of movable display structures to break up the space and provide adaptability.

"We thought of the movable elements as 'characters' in space, each one having a unique form and language of movement," said firm partner Ilias Papageorgiou.

The structures can be moved along brass tracks in the floor, to enable them to "glide and rotate through the space and continuously redefine the surroundings and experience".

They can form intimate areas for private meetings or be arranged in a more open style for shows and large events.

The display objects are made of high-density polyethylene panels – a durable, translucent plastic typically found in industrial applications.

The panels were custom-designed and fabricated using computer numerical control (CNC) milling and folding. There were then assembled using thousands of brass screws. 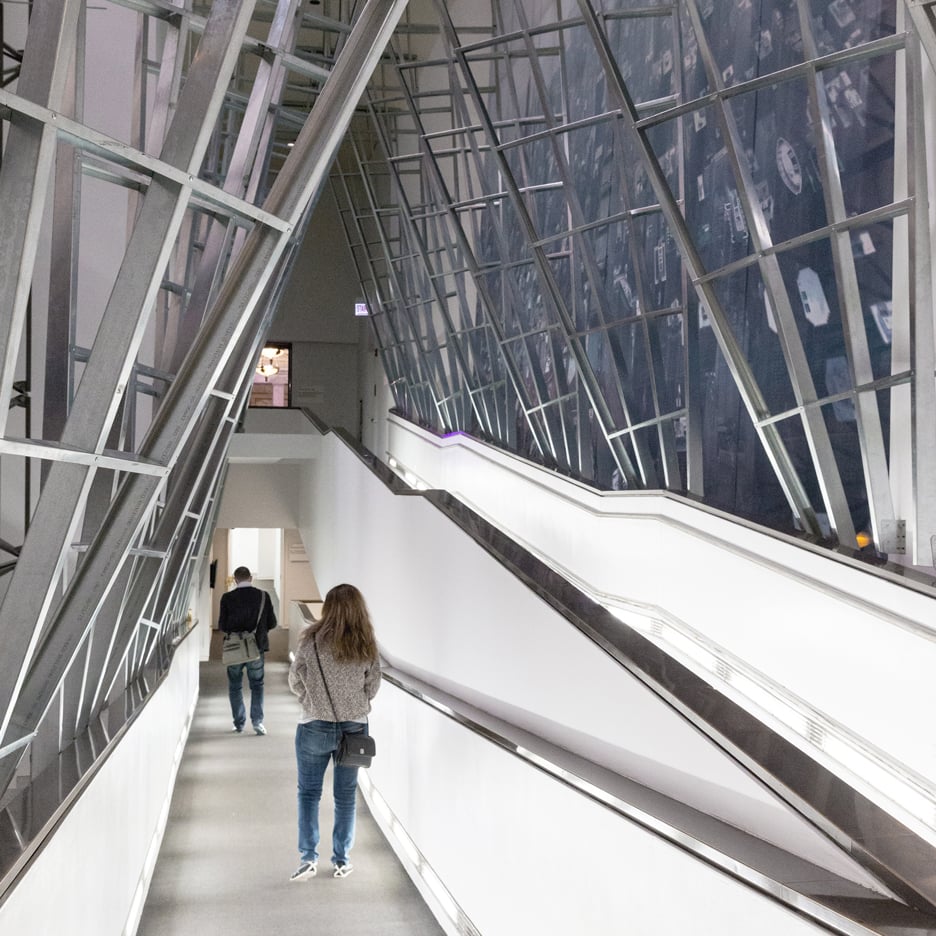 "The plastic's subtle translucency is amplified by the changing daylight from three walls of windows, altering the overall appearance of the space throughout the day and revealing the objects' skeletal structure and assembly," said the firm.

The ceiling is covered in highly reflective PVC plastic, and columns are sheathed in mirrors.

The windows provide views of the street and Central Park, while recessed and reflective window frames dematerialise the boundaries of the showroom.

"The experience is a kaleidoscope of multiplying views, colours and movement," said Papageorgiou. "Although the space is located on the 20th floor of an office building, it creates a strong awareness of the street life and park below."

SO-IL said its design for the space is similar in spirit to two other retail projects by the firm in New York: a flagship store for Benetton, completed in 2012, and an atelier for Derek Lam, completed in 2009.

"For Versace, each of one of the display objects has a unique sculptural form that belies its use, making the showroom both functional and artful."

Based in Brooklyn, SO-IL was founded in 2008 by Idenburg and Jing Liu, who met while working at SANAA in Japan.

Other recent projects by the studio include the proposed Artes Amant art gallery in Brooklyn, the new Tina Kim Gallery in Manhattan, and an installation for the 2015 Chicago Architecture Biennial.