Dezeen Watch Store: Dezeen has teamed up with watch brand Eone to launch our own version of the popular Bradley timepiece, which was originally designed for the visually impaired.

The Bradley by Washington DC-based Eone is one of Dezeen Watch Store's best sellers, and features two ball bearings that allow the wearer tell the time through touch.

The Bradley + Dezeen, our second branded watch, launched this week and features a black titanium face with silver hour markers.

The Dezeen logos is directly embossed onto the underside of the black leather strap, and the limited-edition watch is available exclusively on Dezeen Watch Store.

"While creating it in collaboration with the Dezeen team, we continued to focus on beautiful form and exceptional function with a minimalist, modern aesthetic," Eone co-founder Hyungsoo Kim told Dezeen Watch Store.

"Dezeen is one of the world's most popular design magazines, and Dezeen Watch Store is the leading store for watches by named designers and boutique brands," added Kim. "As a young brand, collaborating with leading groups in design and fashion helps us explore new design prospects and grow further as a design brand."

The Bradley watch first hit the spotlight when it was shortlisted for the London Design Museum's Design of the Year prize in 2014. It was initially designed for the visually impaired, after research found that blind people were buying designer watches but then using their phones to tell the time 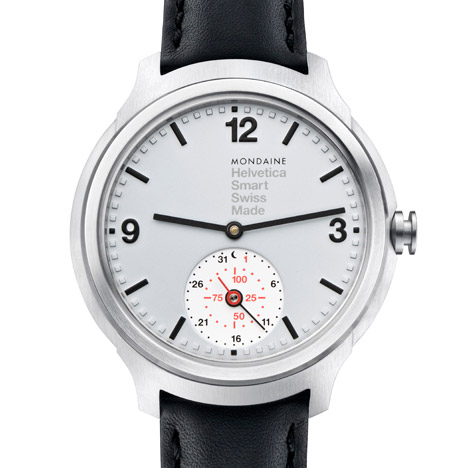 The watch face features raised markers at hour intervals, with a triangle marker to indicate 12 o'clock. A sunken track houses a ball bearing, which is moved and kept in place with a magnet, and a second ball bearing runs around the edge of the case in a similar track. These combine to help the wearer track hours and minutes.

"We started out thinking about what kind of watch would work for blind users and we struck upon this idea of using ball bearings rotating around a track to indicate the minutes and the hours on the dial," Eone lead designer David Zacher told Dezeen when the watch launched.

The watch is named after Bradley Snyder, an ex-naval officer who lost his eyesight in an explosion in Afghanistan in 2011 and who went on to win gold and silver medals at the London 2012 Paralympic Games.

Since it debuted exclusively at Dezeen Watch Store last year, the Bradley has proven to be one of our fastest-selling watches and a popular design with a much wider market than the Eone team originally anticipated.

It comes in a variety of colour combinations with a fabric, leather or metal-mesh strap and metal face. The black titanium Bradley + Dezeen is only available at Dezeen Watch Store.

Earlier this month we unveiled our first partnership with independent Glasgow brand Instrmnt. The Instrmnt 01-DZN has a Minimalist aesthetic influenced by mid-20th century industrial design, with a navy blue leather strap and a gold case that is engraved with the Dezeen logo on the back.