Twelve, which launches at Dezeen Watch Store this week, has a polished circular silver case that creates a 12-sided frame for the watches' face based on the shape of a classic socket wrench.

Two black hands of equal width and rounded ends point out the hours and minutes against the white face, which has no other markings. 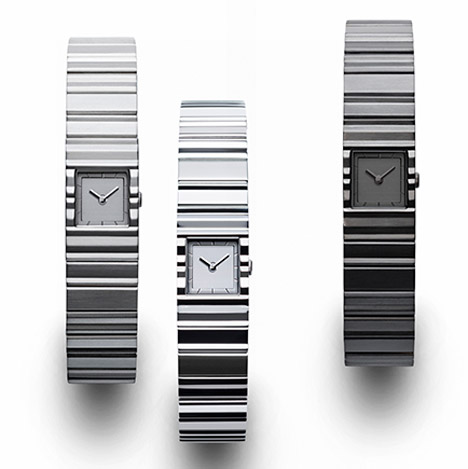 "I wanted to eliminate all markings, even numbers, from the face," explained Fukasawa. "This inspired me to give the crystal itself 12 sides, with the 12 angles of the case serving as hour markers."

Japanese brand Issey Miyake is named after its founder, who launched his design business in 1970 after graduating from the Tama Art University with a degree in graphic design.

Miyake is best known for his fashion collections, which are shown twice a year in Paris. He launched his company's first watch – Insetto by Japanese product designer Shunji Yamanaka – in 2001 and has since worked with a variety of well-known international designers on timepieces for the range.

"The philosophy of the watches is that function is also a form of design," a spokesperson told Dezeen. "The watches embody a clear product design philosophy; function is embraced as an integral part of design."

"Designers are asked to create innovative wristwatches under the general direction of Issey Miyake himself," said the brand. "We have worked with many international designers on the Issey Miyake Watch collection, including Naoto Fukasawa, Tokujin Yoshioka, Yves Behar and Jasper Morrison to name a few."

Fukasawa, who also studied at Tama Art University, is one of Japan's most respected industrial designers. His recent work includes kitchen appliances for Muji, a conceptual passenger lift, and a simplified smartphone.

His previous watch designs for Issey Miyake include the GO watch, which featured a square face, and the Trapezoid watch with a sloping bezel.