Scottish architect Gareth Hoskins, who was responsible for the redesign of Edinburgh's National Museum Scotland, has died following a short illness.

Described by colleagues as "exceptional, visionary and gifted", the Hoskins Architects founder was responsible for the design of the Mareel Cinema and Music Venue in Shetland, and also drew up controversial plans to convert Edinburgh's old Royal High School building into a luxury hotel.

He died on Saturday aged 48, following a heart attack a week earlier at a fencing event in Edinburgh.

"Everyone at Hoskins Architects has lost an exceptional architect, a visionary and a gifted leader, but above all a very good friend," said studio co-director Chris Coleman-Smith.

"Gareth leaves a huge gap, he was such a special person. We appreciate the very many messages of condolence that have already been received," he added.

Hoskins trained at Glasgow School of Art and Florence University before founding Glasgow-based Hoskins Architects in 1998 and a Berlin outpost in 2010.

He was the Scottish Government's National Healthcare Design Champion between 2006 and 2010, and designed several health centres, care homes and hospices across the UK. He was awarded an OBE in 2010. 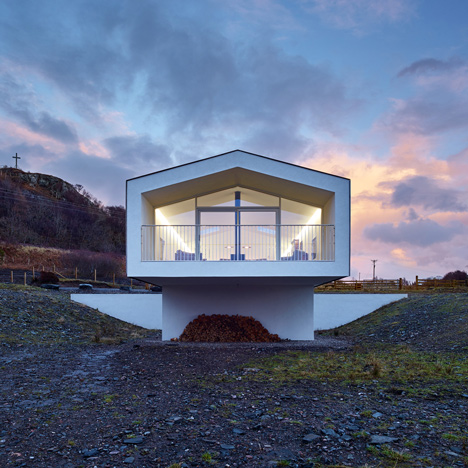 "Gareth Hoskins was always an architect you watched out for," he told Dezeen. "He was always pushing the boundaries of what could be built, challenging the status quo and promoting new ways of serving the public with great architecture."

"Without his pioneering work, particularly with the National Health Service, the opportunity for us all to be able to contribute to the quality of our environments would be much diminished," he added. "His loss is Scotland's and architecture's loss, and it is with huge sadness we hear of his passing."

President of the The Royal Incorporation of Architects in Scotland Willie Watt described Hoskins' death as "a tremendous loss to architecture in Scotland."

Scottish National Party leader Nicola Sturgeon was among those paying their condolences on Twitter this morning. She said: "Very sad to hear of the death of Gareth Hoskins, one of Scotland's finest architects. My thoughts with his family."

A private family funeral and memorial service will be held at a later date.