Four separate volumes fit together "like a puzzle" to form this villa in the Netherlands, designed by Studio Prototype as a contemporary interpretation of the region's typical black barns (+ slideshow).

The Amsterdam-based studio designed Villa Schoorl for a professional photographer who needed areas with different levels of privacy.

This prompted the architects to divide up the structure into different volumes, with the more private domestic areas enclosed with the four blocks, and social and work spaces slotted in between.

Pieced together, the four volumes slightly abstract the traditional house profile. In some places the blocks overlap, and some elements jut out.

"The objects within play a game with the outer surface of the house and volumes pierce through the main mass," said Studio Prototype. "The total feels like a spatial puzzle of materials and moods." 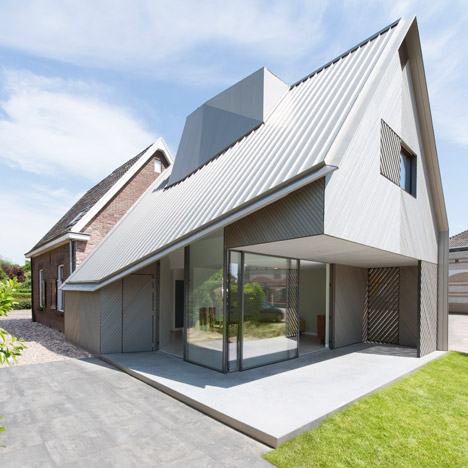 In some place the volumes are set back from the perimeter, allowing the roof to shelter a number of outdoor spaces.

The house is located in the small town of Schoorl, near Alkmaar – part of a coastal region sheltered by sand dunes.

To reference the region's traditional black barns, the house is clad in dark metal. Anodised aluminium forms the side walls and roof, and steel plate was used for the facade.

Instead of covering the metal with paint, the studio developed a transparent coating to protect the material and keep the dark colour.

The dark surfaces continue internally, providing a contrast to the light maple wood interiors and sandy-coloured concrete floor, which references the nearby dunes, according to Spee.

The more enclosed parts of the house, described by the architects as "closed" spaces, accommodate the most privates areas – keeping them separate from the more open social spaces.

"Inside the volumes, intimate spaces such as the library, music room, studio, bedrooms and bathrooms exist," said Spee.

"In between these volumes, a central open living area connects to the veranda, where the exterior flows into the interior – a moment to enjoy the surrounding landscape."

A kitchen is located in the centre of the ground floor, flanked by a dining room and a slightly sunken lounge. These two rooms both feature double-height ceilings.

Glazed sliding doors run along the dining room, leading into the garden, while the living area opens to a covered veranda.

Located near the main entrance is a volume containing a staircase and a bathroom. An enclosed seat faces a window, while the wall facing the central space has storage cabinets for the kitchen.

Alongside the staircase is a bookcase that is open on both sides and reaches the full height of the house. An opening in the bookcase leads to the dining area.

A second staircase is lit by a skylight. It leads up to a landing that serves as a study, with a built-in desk offering views down to the double-height living spaces.

First-floor bedrooms are located within the closed volumes, as is a bathroom that is clad in light wood and lit by a large window sitting above the main entrance.

Studio Prototype is a multidisciplinary design studio for architecture and urbanism. It previously designed a houseboat in Amsterdam and added a gabled extension to a brick house in the town of Duiven.

Photography is by Jeroen Musch.