London-based Liddicoat & Goldhill designed the brick and concrete Tailored House for a Kensington site damaged by bombing in the second world war, to complete an existing terrace of Victorian townhouses.

Numerous challenges and restrictions influenced the design of the house, including a tightly controlled budget, risk of flooding, party wall negotiations, the awkward shape of the site, and the need to maintain the rights to light of the adjacent houses.

The result is a property that mimics the properties of its neighbours and continues the building line, but also introduces several contemporary details – including a concrete window bay and the predominantly glazed rear section.

"The house succeeds in neither aping neighbours, nor becoming an aggregation of responses to different legislative requirements," explained architects David Liddicoat and Sophie Goldhill who also recently transformed an 18th-century barn into a home. 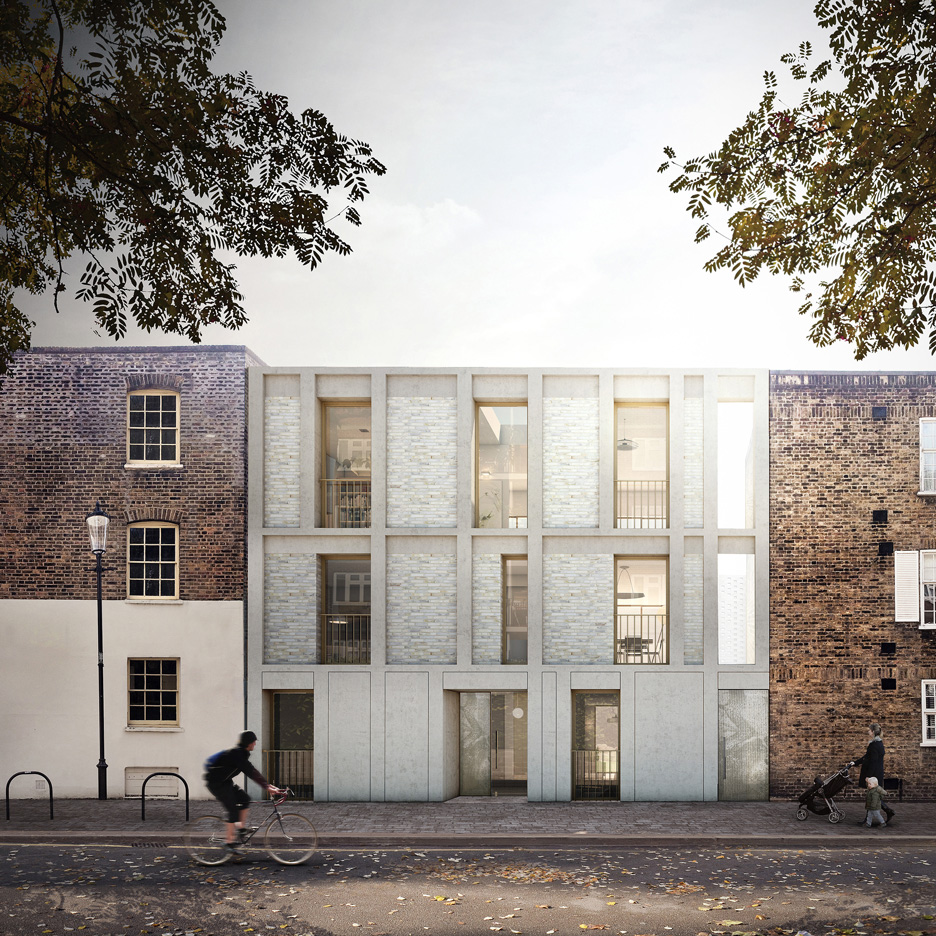 "Instead, the project seeks to create a new London house type, subtly differentiated from its forbears."

The building's roof angles steeply to ensure plenty of daylight can reach the properties behind.

This rear section is cranked outwards to make the most of the space available on the irregularly-shaped plot, and its glazed walls bring plenty of natural light into the interior.

"The sheer brickwork wall gives way to a screen of metal fins that conceal sheer glazing behind," the architects added.

"This barrier affords privacy and filtered light to both the occupants and their neighbours."

Bronze-framed windows are integrated into the angled upper portion of the end elevation. Glazed doors below open from the living room onto a small courtyard with a glass floor that allows light to filter down to the kitchen and dining area below.

The layered arrangement of the street-facing elevation references the treatment of the adjoining terrace, while the use of pale brick nods to nearby buildings and the history of brick construction in London.

Subtle details introduce modern touches to the facade, including the smooth concrete surfaces of the bay containing the entrance and first-floor windows.

The same material is used for the window reveals on the storey above and for a cornice featuring an angular relief pattern.

A skylight embedded in the steeply sloped roof illuminates a stairwell that is positioned along the party wall, while further glazed roof panels enable daylight to reach a small bathroom at the front of the house and a stair that descends to the basement level.

Brick is used throughout the interior to create continuity between indoor and outdoor spaces. The textural walls are complemented by wooden flooring and joinery with a strong grain that adds warmth to the daylight spaces.

The building was given the name the Tailored House, in tribute to the complexity of the design.

"Our clients drew the analogy between their new house and a tailored suit," claimed the architects. "When viewed as a whole it is recognisable, elegant and simple and belies the complexity of its fabrication. However, on closer inspection, greater individuality and material opulence is revealed."

Liddicoat & Goldhill is based in Dalston, east London. Other projects by the studio include an extension to a south London home featuring an oak-screened staircase and double-height windows, and a garden cabin with an angular roof.

Photography is by Will Scott.