VOID scaled down previous designs to create its debut watch for women, but kept the crown slightly oversized to make it easier to adjust the time.

The V03P features a narrow leather strap and a 28-millimetre case – 10 millimetres smaller than VOID's signature V03D watch. Unlike previous models, it has a numberless index.

"Personally I think watches should be made smaller – this supersize trend is getting old," he said. "We kept getting requests from women who like our aesthetics but don't want to wear a men's-size watch." 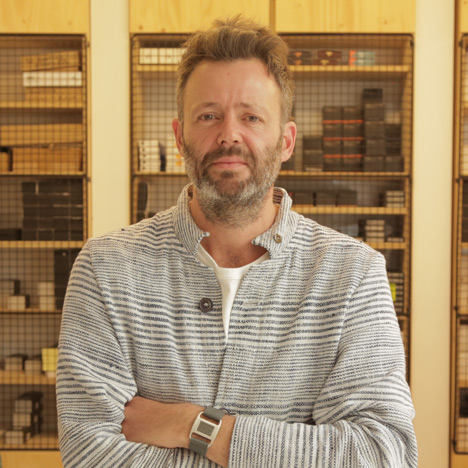 The other new arrival is the popular V03D in a navy/gold version. Combining functionality with a pared-back design, it features a navy leather strap, and second and hour markings.

Both designs are available to buy now at Dezeen Watch Store.

Navy/gold is a sought-after choice for watches at the moment. Recent styles in this combination have proved hugely popular, including Dezeen Watch Store's collaborative watch with Glasgow-based brand Instrmnt, and the limited-edition Munin timepiece from VOID.

"We originally launched this colourway last year, and people were upset when it sold out within the first couple of months," VOID spokesperson Diana DeMarinis told Dezeen. "So we decided to introduce navy/gold to our permanent collection."

More VOID styles available from Dezeen Watch Store include the V03D in numerous colours, and the PXR-5 by British industrial designer Michael Young.

Recent launches from other brands include the Bradley Element by Eone and TID's latest watch with a steel case.