Guests are invited to sleep under the stars in this open-air hotel, which is located 6,463 feet above sea level in the mountains of Graubünden (+ slideshow).

The Swiss Alps room has no walls, roof or bathroom – and is made up of only a bed with a couple of nightstands and lamps.

However, Null Stern, the hotelier behind the concept, will provide a butler to deliver guests breakfast in bed, and a public bathroom is 10 minutes away.

The room costs 250 Swiss francs (approximately £191) per night, and although it is bookable throughout spring and autumn, reservations can be cancelled at the last minute due to poor weather. 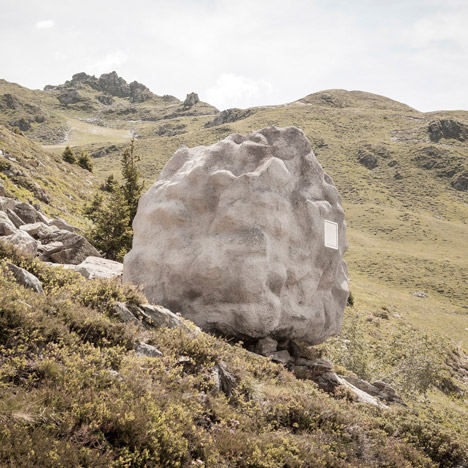 Null Stern, which translates to Zero Stars, was founded in 2008 by brothers Frank and Patrik Riklin and business partner Daniel Charbonnier.

The trio previously transformed a former nuclear bunker in the Swiss city of Teufen into a hotel – branding it the "world's first zero-star hotel".

"Even though this version is radically different from the first one in the nuclear bunker, the essence and the spirit of the concept remains the same – to put the guest at the centre of the experience and to focus on the intangible by reducing everything else to the minimum," said Charbonnier.

Elsewhere in the Swiss Alps, Bureau A concealed a wooden cabin inside an artificial rock, and Milanese firm JM Architecture used mottled grey tiles to make an angular house appear as a "stone in the landscape".

Photography is by Atelier für Sonderaufgaben.