Dezeen Watch Store: Italian designer Alessio Romano's latest watch for Projects is based on Japanese ideas of simplicity, with a stripped-back monochrome design.

The Kiura Chronograph is the third watch created by Sicilian-born designer Alessio Romano for Projects.

Romano aimed to strip back the features of the watch to the essentials, after being inspired by Japanese ideas of simplicity.

"Kiura is a contemporary and classic design free from all those confusing (and unnecessary) markings that few understand," said the designer. "A watch that reads like the time you understand."

Each one features a simple quarter mark instead of numbers and can be individually adjusted using three crowns on the side.

A sloped ring around the face provides the standard minute markings represented by slim lines, with hour markings in matching numbers. 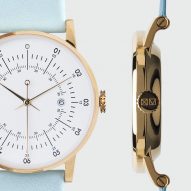 It comes with either a black dial and white markings or a white dial and black markings. The 40-millimetre case is made of black iron-plated stainless steel and joins a matching leather strap.

The watch is named after the Sicilian pronunciation of the Italian phrase "che ore?" – spoken as "chi ura?" and meaning "what time is it?".

According to the designer the word also relates to Japanese culture and language.

"In Japan, simplicity, harmony, ethics and severity are the pillars of the welfare of inner life," said Romano.

"Kiura embodies these characteristics by reducing and simplifying every aspect of the 'classic' chronograph, returning it to the essence of its simple and pure graphics."

Romano has been named as one of Italy's best designers under 35, and has previously designed two watches for US-based Projects – the Ora Major, with hands based on the shape of constellations, and the Optical Blue based on 1960s Op-art.

Projects was founded in 1990 with the intention of producing household items designed by internationally renowned architects like the late Michael Graves.

It quickly established a reputation for experimental, design-led watchmaking, which continues today with products like the Crossover and Sometimes by Milan designer Denis Guidone.

Get your Kiura Chronograph by Projects on Dezeen Watch Store »