Architecture studio Archohm has completed a campus for promoting crafts in the Indian city of Lucknow, featuring a cluster of grass-roofed workshops and a spiralling shopping arcade (+ slideshow).

Awadh Shilpgram was designed by Archohm to accommodate almost 200 shops dedicated to crafts from around the region and beyond, alongside craft courts for hosting workshops, an amphitheatre, an exhibition hall and a food court.

The aim is to provide local craftspeople with a place where they can share ideas, teach, learn and sell their work directly to customers.

The buildings developed for the complex are intended to form a collage of shapes and materials that references the chaotic composition of the urban bazaars found throughout the region.

From an entrance courtyard, a spiralling structure lined with craft shops leads visitors gradually towards an open plaza at the centre of the curving building.

"It narrows down while spiralling inward, and emulates the density and vibrancy of traditional Lucknowi bazaars, which have streets that get progressively narrower."

The eight-hectare site is located close to a major highway in a rapidly developing area of the Uttar Pradesh region's capital city. 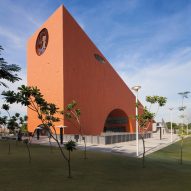 The area's historic structures also influenced the design of the campus. In particular, the arches of Agra's Buland Darwaza – also known as the Gate of Magnificence – informed an arch-lined colonnade flanking the spiralling passage.

"The arch, being an important architectural element of the architecture of the city of Lucknow, is introduced as a skin to the inner face of the buildings," the architects added, "but is given a make-over in a contemporary style with continuous access beneath it."

Perforated stone jali screens traditionally used to channel cool air into the rooms of Indian buildings are incorporated into the steel frames of the double-height arches, which allow entry to the circulation space at ground-floor level.

The intricate patterns carved into the jalis are based on traditional Chikan embroidery.

The open area at the centre of the complex contains a stepped amphitheatre that incorporates planted beds. A paved ramp provides access to the upper level, which looks down towards the circular stage.

Outside of the main spiral building, a cluster of stone-walled structures with rounded turf-covered roofs provide demonstration areas where artisans can conduct workshops observed by groups seated on benches incorporated into the inner walls.

Elsewhere on the campus is an arc-shaped exhibition hall and a food court that look onto a circular lawn with a fountain at its centre. The main buildings are clad with red Agra sandstone that helps to unify their diverse forms and functions.