The latest watch from American brand Projects takes its unusual dial design from a drawing produced in the 1920s by influential Russian painter Wassily Kandinsky.

Milan-based designer Denis Guidone based these elements on a drawing of the same name by Russian artist Wassily Kandinsky – who is credited as one of the first abstract painters in history.

The Diagram 17 drawing was originally published in 1926 in Kandinsky's landmark essay, Point and Line to Plane.

The hands of the watch are formed from two black lines of varying thicknesses, which turn independently of one another to create a constantly changing composition.

Three thinner lines are static on the dial, while two half-circles follow the hours hand. 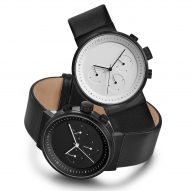 Now available to buy from Dezeen Watch Store, Diagram 17 comes with a black stainless-steel case and a thick silicone strap. The dial is available in either black or white.

His Suprematism timepiece – also available from Dezeen Watch Store – pays homage to an art movement of the same name, which is defined by bold shapes and colours.

Projects produces a wide range of household items designed by internationally renowned architects. But, since its founding in 1990, it has established a reputation for experimental, design-led watchmaking.

Other timepieces by the brand include Scallop by the late Michael Graves and Kiura Chronograph by Italian designer Alessio Romano.