Featuring a 38-millimetre case, the D38 and S38 models are scaled-down versions of the designer's D42 range – also stocked by Dezeen Watch Store.

The watch face is surrounded by a serrated ring with cog-like indentations and protrusions that indicate the hours, giving the timepiece an industrial yet refined aesthetic.

The D38 has a streamlined lug-less silhouette and comes with either a black or brown leather strap.

The S38 has a linked strap to match its case, which is comes in either stainless silver steel, brass or matt black.

Eek launched his first timepiece with LEFF, which believes that "nobody needs a clock" – a sentiment shared by the prolific designer.

Founders Arno and Dennis Ruijzenaars and Erwin Termaat originally approached Eek to design an analogue clock, which led to his Tube Series that now includes the watch and a speaker.

Despite the collaboration with LEFF Amsterdam, Eek described the watch market as being over-saturated in an interview with Dezeen.

"There are hundreds and thousands of watches so why make another one?" he said at the collection launch during Milan design week last year.

"It's very difficult to make something like a watch and to add something that is worth adding," he continued.

"I said before I started with the commission: 'I'll only do it when I have a good idea, when I feel comfortable with a concept that is good enough to get it all the way'." 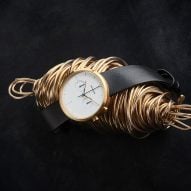 The D38 and S38 Tube watches are now available to pre-order from Dezeen Watch Store.

Other new timepieces now in stock include Void's thinnest ever timepiece and the latest collection from Greyhours.