HBO – the TV network behind shows such as Game of Thrones, Sex and the City, and The Sopranos – has seen a rapid uptake of its on-demand services like HBO GO and HBO NOW over the past few years.

"They recognised this as an opportunity to develop a high-performance workspace that would support their main objectives — reimagining and reengineering entertainment," said Rapt Studio, which was tasked with designing the interiors.

The studio set out to create a flexible workspace for HBO, with an aesthetic and material palette influenced by the maritime history of the Pacific Northwest.

"Due to the nature of their work, the flexibility and adaptability of the space was paramount," said Rapt.

"The space had to support and inspire the agile process of the teams while allowing for constant change and reconfiguration of the teams' size and mission."

To accommodate this, a raised flooring system was added and mobile desks were provided to allow employees to reconfigure their work areas.

The reception area is located on the ninth floor, which looks out over Seattle. A demonstration lab for testing HBO's digital content on different devices, a lounge area for showcasing new products to press, and a screening room are also found on this level.

Up a large central staircase is a coffee bar, and lounge seating beside a library space. The design studio is set up like a workshop, with moveable tables and carts.

The 11th floor houses a large break room and pantry, as well as a games room filled with classic arcade machines.

Tactile materials and features feature across all three floors. Lengths of rope hang above the elevator lobby and felt lampshades are suspended over seating areas, while planting adds a touch of greenery.

Expanses of wood and raw steel are intended to reference the maritime and manufacturing history of the region.

"It was important for the project to feel unique to Seattle and celebrate the local culture," Rapt added. 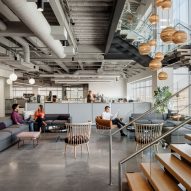