Popular timepieces by Stock and Projects have been given a colourful overhaul, and are now available to buy from Dezeen Watch Store.

The Diagram 17 from US brand Projects is known for its unusual dial design taken from a 1920s drawing produced by Russian painter Wassily Kandinsky.

Lines of varying thicknesses form the hands, which have been updated in the primary colours red, yellow and blue. A group of three slim blue lines turn slowly to indicate the hour, which can be found at the point they touch the edge of the dial.

The squat red line turns as the seconds pass, while the slim yellow line indicates the passing of the hour. As the lines turn, the composition constantly shifts in homage to Kandinsky's abstract forms.

The watch comes with an updated silver stainless-steel case and thick silicone strap, and was designed by Milan-based designer Denis Guidone. A bulbous crown is positioned at 2 o'clock, instead of the conventional placement of 3 o'clock.

The S002 by Australian brand Stock is also available in a new colour combination from Dezeen Watch Store. It features a black leather strap and brushed gold case, lugs and second hand.

The Stock range references vintage watches in its design, but with the addition of numberless indices for a pared-back, minimalist aesthetic. The brand's signature o logo, which is based on the typographic abbreviation for the word number, marks 12 o'clock.

Stock watches first launched at Dezeen Watch Store in 2013, and have become a firm favourite for their subtle vintage details and precise Swiss mechanism.

Stock was founded in 2013 by Melbourne-based designer and watch enthusiast David Tatangelo, who based the range on his personal collection of timepieces. 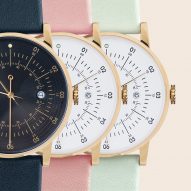