Google has presented the latest designs for its new Mountain View office campus, designed by BIG and Heatherwick Studio, ahead of a public hearing next week.

As revealed in earlier images, rooms will be divided up into rectilinear "pavilions", all sheltered beneath the roof canopy.

The majority of the building's facilities – including laboratories, cafes, offices and events spaces – will be at ground level, while offices will be raised up on a mezzanine level above.

The roof itself will be made up of curved metal squares in both pale and dark grey, including a finish that will deter birds from flying into it, according to the document.

It will incorporate photovoltaic solar panels and "smile-shaped clerestories" to bring direct, indirect and diffused natural light down to the spaces below.

The rest of the building will be constructed using a minimalist palette of materials that predominantly include metal and glass.

The floor plan is deliberately designed to not line up with the roof above, to create "outdoor rooms" at corners. Some of the spaces designed for these corners include "sloped savannah", "hangout hill" and a sculpture garden.

The designs still also include the "green loop" – a pedestrian pathway designed to snake through the building, creating a network of indoor/outdoor spaces lined with shops and cafes.

"The design of Charleston East includes a large canopy that regulates indoor climate, air quality and sound, and encloses flexible components that can be rearranged as necessary," reads the document.

"Our plans for the indoor and outdoor spaces include native habitats and vegetation designed to support local biodiversity and create educational opportunities for the community."

BIG and Heatherwick Studio first unveiled their ambitious plans for a new Google campus in February 2015. Billed as a "vibrant new neighbourhood", it is set to be built by robots as a series of lightweight, mobile structures.

In an exclusive interview with Dezeen, BIG founder Bjarke Ingels said the project would set a new industry standard for workplace design and help define "Google 2.0". 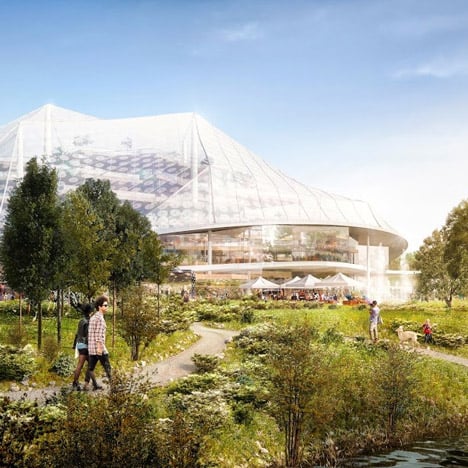 The project hit a major roadblock later that year, when city councillors gave social network LinkedIn the majority of the land Google were after.

But the company then revealed that it had a backup option – it already had planning permission to build office and commercial space on the current site, which is located near Charleston Park.

This site is significantly smaller, so the design team had to completely rework their design. The latest offering is much more compact than the original vision, and as yet there has been no mention of robot construction.

BIG and Heatherwick Studio are also now working together on Google's London headquarters.

Both offices also have many other big projects in the pipeline. BIG is also working on a combined power plant and ski slope for Copenhagen, the San Pellegrino HQ for Italy and the Hyperloop transportation system between Dubai and Abu Dhabi.

Heatherwick's current projects include the controversial Garden Bridge for London and a honeycomb-like structure for Hudson Yards in New York. 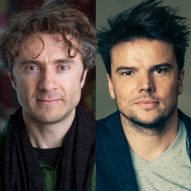