Now available to buy from Dezeen Watch Store, the Line collection is made up of four timepieces, designed for those who prefer a precise approach to timekeeping.

Two new styles are available, Inline and Outline, across a variety of muted colour combinations.

The Inline watch features markings close to the centre of the dial, leaving a clean outer band around the outside. Five minute increments are marked with a bold line and each quarter hour is numbered in a minimal typeface.

The Inline is available in black and white or nude and black, and comes with a leather strap made in Sweden using organic vegetable dyes.

The Outline watch has 12 numerals and elongated minute increments that extend to the edge of the dial.  It comes in all-black or nude and white.

Other features include a hexagonal crown and highly accurate Swiss movement. The lens is made from beveled sapphire-coated mineral crystal.

Founded in 2014 by Glasgow-based couple Alan and Kelsey Moore, Nomad is one of the most successful contemporary watch brands to come out of Scotland in recent years.

The brand approached Samuel Wilkinson – who is best known for designing the Plumen 001 lightbulb – to design the brand's first timepiece in March 2014. The result was the graphical Mòltair collection, which launched in 2015.

The success of his designs led the duo to work with him a second time.

"The Line collection is simple in appearance but features lots of subtle details that set it apart from all other watches on the market," Alan Moore told Dezeen.

"We knew we wanted to create minimalist watches that had their own identity and used premium materials but we didn't have a clear picture of what the end product would look like initially."

"We worked closely with Samuel who created initial concepts that we continuously refined until we had a watch we were really happy with," he added. 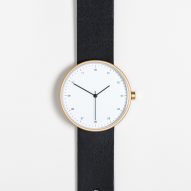 Other Glasgow-based brands at Dezeen Watch Store include Instrmnt, which launched a collaboration timepiece with Dezeen in November last year.