The production line of Poland's oldest porcelain factory has been temporarily sabotaged – so one batch of its traditional tableware is stained blue with factory workers' fingerprints.

Presented at DesignMarch 2017, The Human Trace tableware forms part of a project called People from the Porcelain Factory, by anthropologist and curator Ewa Klekot, and ceramist Arkadiusz Szwed.

The project aims to highlight the fact that humans still have a role to play in industrial manufacturing.

This tableware was produced in the tiny Polish town of Cmielow, which is home to a porcelain factory dating back to 1790.

Workers on the production line wore gloves with fingertips dipped in cobalt blue salts. Their fingerprints became imprinted on the surface of the clay as they handled it.

The marks remained almost invisible until firing, when irregular patterns appeared on the porcelain body as the cobalt turned dark blue.

"The project emphasises how valuable a man is in a factory. It shows us that the porcelain that we use is a result of the human work and that this human touch is part of the whole manufacturing process," Szwed told Dezeen.

"When I went to Cmielow for the first time, I was fascinated primarily by the people working in the production line," he said.

"These days the manufacturers remove the traces of human labour. By showing how many people from the production line touched a product, it become no longer anonymous."

The Human Trace was displayed in the loft of Hannesarholt, an old house that originally belonged to poet and shaker Hannes Hafstein, during DesignMarch 2017.

DesignMarch is Iceland's biggest design festival, and ran from 23 to 26 March this year. Other highlights included lamps made from dried fish and an exhibition of designers from Baltic countries. 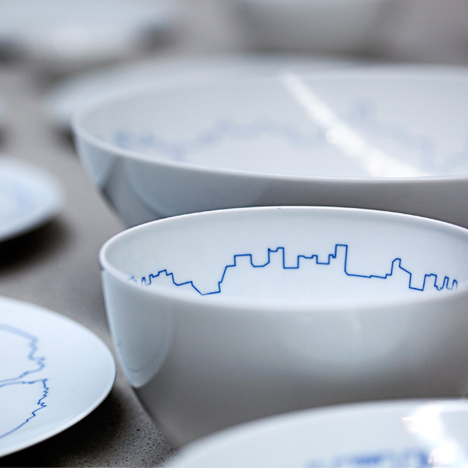