Watch brand Eone has launched its tactile Bradley watch in gold and rose gold – and for one weekend only it is available to pre-order at Dezeen Watch Store with a special 15 per cent discount.

Originally designed for blind people, The Bradley has developed a cult following in the design community thanks to its distinctive look and mechanism, which allows the wearer to tell the time using touch.

Instead of hands and numerals, the watch features a face with raised batons and a magnet that rotates two ball bearings around the watch face. The front ball indicates minutes, while the rear ball shows the hour.

The Bradley Mesh comes with a lightweight Milanese mesh strap – in line with the recent trend for this feature.

It is now available in gold or rose gold PVD-coated stainless steel. It has a 40-millimetre case and carries a Swiss quartz movement.

To celebrate the launch, customers can also get 15 per cent off any Bradley watch ordered this weekend. Shop The Bradley collection ›

Founder Hysungsoo Kim said he was struck by the idea to create The Bradley after sitting next to a visually impaired student at an MIT lecture, who was embarrassed by his talking watch.

"We wanted to show that blind people have an equal desire to be fashionable and look good," he told Dezeen Watch Store in a 2014 interview.

"I think we've done a good job presenting The Bradley as a fashionable timepiece, not just as a watch for the blind," he added. "People say it's pretty much the only wristwatch out there that lets you feel time."

The watch was nominated for the Design Museum's Design of The Year awards in 2014. It is named after Bradley Snyder, an ex-naval officer who won gold and silver medals at the London 2012 Paralympic Games despite losing his eyesight in the Afghanistan war.

Milanese mesh has been a popular material with watch designers recently – other new arrivals that feature the material include Rosendahl's Picto and Mondaine's Swiss Railways watch. 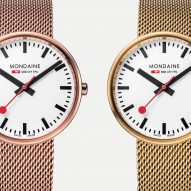