A "building block castle" by Camille Walala and an undulating tapestry by Ross Lovegrove are among the 400 events prepped to take place during this year's London Design Festival.

The 15th edition of the London Design Festival takes place across the city from 16 to 24 September 2017.

Event organisers announced the installation programme during a press conference at the V&A this morning, revealing that textile designer Camille Walala will be creating this year's key Landmark Project, the festival's largest installation.

Walala's project, named Villa Walala, will be installed in Broadgate – an area flanked by offices and tower blocks.

Described by the festival as a "building block castle", the installation will be typical of Walala's bold, colourful style, and will be made up of giant soft shapes each patterned with a digital print.

The shapes will be anchored to the ground and inflated by fans, transforming them from flat shapes into a three-dimensional structure.

The festival's long-standing collaboration with the V&A in South Kensington will continue, with designers creating site-specific installations in the museum's grounds.

Among these is Ross Lovegrove's Transmission installation, which will be erected in the museum's tapestry gallery and is based on the surrounding works.

Created in collaboration with Alcantara, an Italian company that manufactures artificial suede, the designer has created an undulating structure that is – unlike most works the V&A – meant to be touched.

"The installation responds to the rich scenes of wealth and aristocratic fashion depicted in the 15th-century tapestries at the V&A," said the organisers.

"Gold and silver threads create an ornamental pattern of over 2,000,000 flecks running along the edge of the sculpture, standing out brightly against the rest of the installation."

One of the more politically fuelled works is designed by Palestinian architects Elias and Yousef Anastas, whose While We Wait installation is a tower made from a stone latticework.

The work is based on the Cremisan Valley, a green area located on the seam line between the West Bank and Jerusalem, and aims to explore the "cultural claim of nature in Palestine".

"As one of the few remaining green spaces in the Palestinian landscape, the work navigates the issues surrounding the construction of a wall in the middle of the valley, which separated links between a monastery and the local community," said the designers.

During the festival, the installation aims to give visitors to the V&A a meditative space. But once the festival is over, the structure will move to a site within the Cremisan Valley in hopes of it being integrated and used by the local communities. 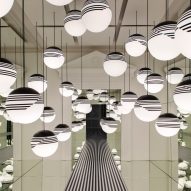 The installations form part of a programme of over 400 events that will be held across the capital during the London Design Festival, which will run from 16 to 24 September 2017. It is one of the largest design events in the world, and ranked 13th on Dezeen's Events Hot List.