Researchers from MIT's Media Lab have developed a tattoo ink that changes colour according to varying glucose and pH levels inside the body.

Hoping to turn the body into an "interactive display", they developed a method for replacing tattoo inks with biosensors – liquids that change colour in response to alterations in the bloodstream.

"We developed four biosensors, reacting to three pieces of biochemical information in body fluid and changing colours," said the group.

"The pH sensor changes between purple and pink, the glucose sensor shifts between blue and brown; the sodium and a second pH sensor fluoresce at a higher intensity under UV light."

While currently in its testing phase – in which the group injected the liquid into pig skin – they believe in the future it could be used as a medical tool.

For example, diabetic patients who do daily pin prick tests to check their blood sugar levels could do so with a biosensor tattoo, simply by monitoring the change in colour.

"In the same way that the wearables industry is integrating fashion practices into its development, we envisage participation between the biotech industries and skincare professionals, such as prosthesis experts and tattooists, in order to embrace the idea of human device symbiosis," they said.

The group vertically injected the liquid into pig skin during the testing procedure, to mimic the way ink is applied during tattooing.

A similar health-tracking concept was presented by materials scientist John Rogers, who created a tattoo-like electronic mesh that monitors temperature, hydration and strain. 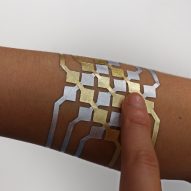 While both these concepts are envisaged for the healthcare industries, other designers have developed versions of tattoos that would perform different functions.

Researchers at MIT's Media Lab created a series of smart temporary tattoos that can control devices through touch but are designed to look like the metallic flash tattoos that are popular at music festivals.