There's limited stock left in Dezeen Watch Store's final sale, with selected styles now discounted by up to 40 per cent.

Time is running out to purchase a watch from the store, which will close for business on July 2 – or sooner if all stock sells out. Further deductions mean customers can now save up to 40 per cent on a design classic.

All watches by Instrmnt are now reduced by 15 per cent. The Glasgow-based brand has been a longstanding favourite for its minimalist design approach and self-assembly timepieces.

The limited-edition Instrmnt 02-DZN, which was designed by Instrmnt in collaboration with Dezeen, is reduced from £180 to £99.

Popular styles are reduced further, including the Bradley Mesh in gold, which was £309 but now costs £189. The watch is a metallic version of Eone's popular tactile timepiece, which allows the wearer to tell the time using touch.

The Lugano 40mm in silver by Larsson and Jennings is reduced to just £150. The Anglo-Swedish brand borrows from its Scandinavian roots to reinterpret the traditional British dress watch.

Launched in 2009, Dezeen Watch Store was the first-ever online store for design-led watches.The full story of why Dezeen opened a watch store is told in this 2014 interview with Marcus Fairs. 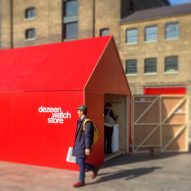