Designed by Royal College of Art graduate Elena Larriba, Vycle is a pedal-powered, vertical transportation system that offers a space-saving alternative to lifts and stairs.

The design, which resembles the front half of a bike attached to a vertical rail, can be fitted to the side of buildings, scaffolding or cranes.

"There are currently two main methods for vertical transportation that have prevailed for the last 100 years, the stairs and the lift," explained Elena Larriba, who studied in the Royal College of Art's (RCA) Innovation Design Engineering masters programme.

"Stairs are bulky and unattractive, especially in high rise buildings where people don't often use them, and lifts require a lot of energy in order to move one person a couple of meters up. This carves out an area of opportunity that sits between the two."

Powered by a continuous cyclical movement, the system is balanced with counterweights, leaving the user's body as the only weight to overcome. A gearing system, similar to a bike's, allows the user to decide how much effort they want to put into ascending or descending.

In densely populated and rapidly growing cities such as those in China, where it is estimated that by 2025 the country will have built 50,000 new skyscrapers, Vycle could be used in new buildings where space is at a premium or where there is no space for a full-sized lift shaft.

Larriba also suggested that Vycle could be used during the construction of tall buildings.

"The lightweight, low square footage and flexible aspect of the system makes it suitable for retrofitting and temporary installations like in the use of scaffoldings or cranes," she said.

"In the construction sector, around a quarter of the workforce is aged over 50. Vycle is an alternative to long ladders often used in these temporary works that can offer the user a more sustainable and safer way to navigate through scaffoldings, cranes or transmission towers." 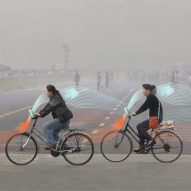 "On one side it improves the long-term wellbeing of the employee and on the other reintroduces the sense of flow and community that currently is exclusive on the urban ground plane."

This year's Royal College of Art graduate exhibition ran from 24 June to 2 July. Other showcased products included an office chair made from rattan and a set of jelly-like silicone plates that add a new dimension to the dining experience.