Major US magazines have dedicated their front covers to recent political events with illustrations that reference Donald Trump, the Nazi Party and the KKK.

The New Yorker, Economist and Time magazines all revealed illustrated covers for their next editions yesterday, after an extraordinary week in American politics that saw a deadly white-nationalist rally take place in Charlottesville, Virginia.

The events have continued to dominate news headlines as President Donald Trump equivocated in condemning Neo-Nazi and Ku Klux Klan (KKK) groups. He instead blamed "many sides" for the violence that culminated in the death of civil-rights activist Heather Heyer when a motorist associated with the white-supremacist groups drove a car into the counter-protest on Saturday.

In response, US illustrator David Plunkert sketched an image of Trump in a sailboat, puffing up the sail with his own breath. The billowing white canvas has two holes in its centre, conjuring the image of a Klansman's hood.

Plunkert, whose illustration will appear on the cover of the 28 August issue of the New Yorker, said the nature of the events in Charlottesville had prompted him to diverge from his usual subjects and create an explicitly political work.

"President Trump's weak pushback to hate groups – as if he was trying not to alienate them as voters – compelled me to take up my pen," he said.

"A picture does a better job showing my thoughts than words do; it can have a light touch on a subject that’s extremely scary."

Working for the Economist, Irish illustrator Jon Berkeley similarly drew on KKK iconography for his work, which depicts Trump blowing into a hood-like white megaphone. It accompanies an article that claims "Donald Trump has no grasp of what it means to be president".

Berkeley told the Huffington Post that the Economist usually commissioned covers on Mondays, but wanted to make a last-minute change to focus on Trump on Wednesday, following a press conference the previous day where the president backflipped on an earlier, scripted condemnation of white-supremacist groups.

"I do think that cartoons and illustration can have a strong effect on people's perception of particular people or events over time ― maybe even more so as the credibility of the printed word is dented," said Berkeley.

He described the instantly recognisable KKK hood as "a gift in graphic terms". The issue of the Economist with Berkeley's cover is out on 19 August.

A third related illustration came from Time magazine and will appear on its 28 August edition. Created by Cuban-American artist Edel Rodriguez, it forgoes a direct image of Trump and instead features the American flag draped on a figure giving the Nazi salute.

Rodriguez has now done a series of political covers for Time, including two images depicting Trump's escalating "meltdown" during the presidential campaign.

Trump's rise from real-estate mogul to Republican candidate and eventual president of the United States has prompted a constant stream of responses from designers and architects, including a Nazi-style logo and an IKEA version of his proposed Mexican border wall. 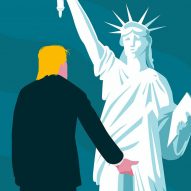