A sofa shaped like a hot dog and a burger-like chair are among Studio Job's latest designs for Italian brand Seletti.

The food-themed pieces are part of Studio Job's Un_Limited Editions collection, and will be launched by Seletti during next month's Maison&Objet furniture fair in Paris.

As with actual hot dogs and burgers – described by Seletti as "iconic images of American pop culture" – the sofa and chair are each made up of a number of components.

The Hamburger chair features a bun-like seat, with cushions designed to look like a patty, a tomato and a gherkin.

The Hot Dog chair has much the same – but in place of the circular patty cushion is a long sausage embroidered with a squiggly yellow pattern to look like mustard.

Both pieces mark Seletti's first foray into upholstered furniture, which the brand says has come as a response to its "steady growth".

All the pieces will be on show at Seletti's stand at the September edition of Maison&Objet, taking place this year from 8 to 12 September.

Studio Job founders Job Smeets and Nynke Tynagel – a former couple – have become known for their autobiographical and maximalist approach to design, and once crafted a coffee table that symbolised their break-up as a head-on collision between two steam trains.

Earlier this year, the duo created a brick punchbag and a smoke-topped table for Gufram's new limited-edition range, which is aimed at the "most demanding collectors".

During last year's Design Miami, they unveiled an eight-metre-tall tree depicting an array of memories and thoughts outside the OMA-designed Faena Forum building.

Studio Job ranked at number 111 on Dezeen Hot List, a data-based power ranking of design and architecture's most influential figures. 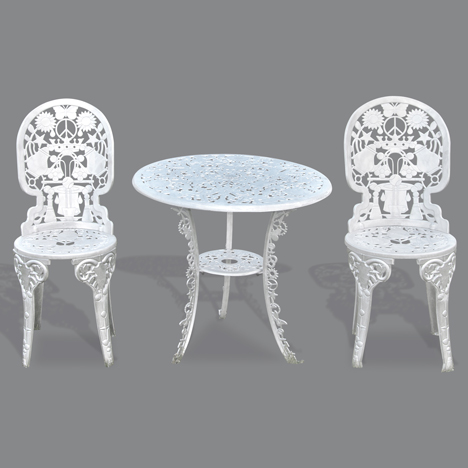