This low-lying brick-and-concrete apartment complex was designed by architecture firm Woods Bagot to reflect the scale and materiality of the surrounding buildings in a Melbourne suburb.

Elwood House is situated on the site of a former Retired Service League community hall in Elwood, an inner suburb located around eight kilometres south of Melbourne's central business district.

The four-storey block contains 30 apartments, ranging in size from one to three bedrooms. Each unit is unique and designed as an individual house targeted at local owner-occupiers looking to downsize to more compact residences.

The apartments are grouped within a building designed in collaboration with the client, Piccolo Developments, to create a combined sense of individuality and community, as well as a connection to the locality.

"With respect for the history of the site, the building reflects the grain and scale of the surrounding neighbourhood while providing an evolution of the architectural language by introducing a refined level of detail," said the architects.

"The scheme draws on the character of its immediate context to influence the built form, transforming the typically low-scale residential vernacular in a modern interpretation of brick patterning," they added.

Along one side, the building's elevation extends to the boundary of the site in reference to the way terraced properties in the area are constructed.

To further echo the neighbouring terraces, the elevations are broken up by openings that allow light and natural ventilation to penetrate deep into the floor plan.

These gaps also serve to express the separation of the individual units, enhancing the sense of space and privacy for each owner.

Board-marked concrete used for the structure introduces a textural detail to the facades, where it is complemented by dark-brick planters lining the balconies.

The rough concrete extends across the walls and soffits of the balconies, as well as reaching into the communal spaces and living areas, where it provides a tangible connection to the underlying construction method.

A lobby on the ground floor receives natural illumination from a brick-lined atrium incorporating a reflecting pool and water feature, which are overlooked by internal balconies on the upper floors.

"Creating a moment of tranquillity and spirituality, the water feature and entrance sculpture provides residents with an element more typically found in a house than an apartment," said the architects.

The interiors of the apartments were developed in collaboration with local studio Hecker Guthrie and feature materials chosen to complement the overall raw and robust aesthetic.

Independent joinery elements such as the kitchen units are clad in either grey stone or bronze, with details including cabinet handles and the bathroom hardware also specified in bronze.

The studio used a palette of industrial materials at a zinc-clad apartment block in a neighbourhood in northern Melbourne, and incorporated tiered timber seating at the centre of its own offices in the city's central business district. 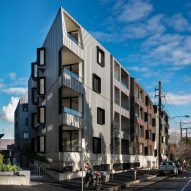