Architects Anna and Eugeni Bach are making the Barcelona Pavilion more minimal than ever before – by covering all of its walls with white panels.

The Spanish architects are currently in the process of transforming the Ludwig Mies van der Rohe masterpiece. Over the course of a week, they are gradually hiding all the building's distinctive marble wall surfaces behind white vinyl screens.

Their aim is to completely transform the steel, glass and marble structure, so that it appears more like a full-scale model than a building.

"This simple act turns the pavilion into a 1:1 scale mock-up, a representation of itself that opens the door to multiple interpretations about aspects like the value of the original, the role of the white surface as an image of modernity, and the importance of materiality in the perception of space," said the duo.

Called Mies Missing Materiality, the project is the latest in a series of temporary installations that have been staged at the pavilion, which is a recreation of the structure that Mies van der Rohe built for the Barcelona Expo in 1929.

Chinese artist Ai Weiwei filled the pools with coffee and milk in 2009, while in 2013, Spanish architect Andrés Jaque filled it with junk from the basement.

But Anna and Eugeni Bach's project marks one of the most significant changes to the building's appearance.

"To provide the pavilion in Barcelona with that homogenising whiteness means to endow it with one of the defining features of modern historiography," they said. "Yet at the same time, it also involves stripping the pavilion of its materiality and its unique characteristics – specifically the one that erected it as an icon of the modern movement."

"The installation turns this paradox into an experience. It helps visitors to consider these ideas and many more through their own experience in a pavilion that will lose all trace of its materiality for a few days to assume all its representative potential."

The transformation will be complete by 16 November 2017, when it will stage a debate between Anna and Eugeni Bach and fellow architects María Langarita and Carlos Quintáns.

The panels will be removed on 27 November 2017, restoring the pavilion to its previous state.

Anna and Eugeni Bach are based in Barcelona. Their past projects include an apartment with a desk hanging from the ceiling and a house extended with a skeletal framework. 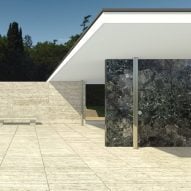