A moulded plywood pavilion built within a Singapore furniture store has won the title of World Interior of the Year at Inside festival 2017.

Created as a display area for the office furniture manufacturer Herman Miller within Singapore's Xtra store, the form references the company's moulded and ergonomic chairs.

Singapore design studio Produce Workshop added studded details on the inner and outer faces of the structure named Fabricwood, lending it the  appearance of button-tufted upholstery.

The project was selected as the winner of the 2017 World Interior of the Year by Super Jury members, architects Isay Weinfeld, Mark Dytham of Klein Dytham Architecture and Monica von Schmalensee of White Arkitekter.

"A fresh approach to a project. It was about the process rather than the end product that led to a unique and new solution," said the panel.

"He showed a clear understanding of the brand. Engineering lead to the architecture. Process creating an invention."

Fabricwood was selected ahead of eight other category winners announced on day one and day two of the festival. Among them are Heneghan Peng Architects' Dublin headquarters for Airbnb and the conversion of a former missile factory in Beijing into a car repair garage and offices by Neri&Hu.

During this initial judging phase, the category jury describe the project as a "clever, innovative installation with a resonance well beyond the brief".

The Inside festival awards recognise the best interior design of the last 12 months.

Last year the top prize was awarded to monochrome clothing store by AN Design in Hangzhou, China, a warehouse-like space where clothing is presented on geometric rails. 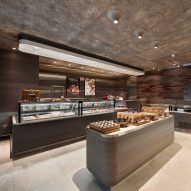