A conceptual project, the Synthetic Polleniser is a system of robotic flowers, designed to be safer for bees to pollinate than real fauna.

"Bees are a vital part of our ecosystem, I feel that everyone needs to take the time and get to know these hard workers that keep our plants and crops pollinated," Candy told Dezeen.

"It is common knowledge that bee population is suffering worldwide due to pesticides, climate change and Varroa mites – for these problems we can find solutions."

Candy's robotic flowers are all equipped with pollen and nectar. They are designed to be installed alongside real plants, to encourage bees to pollinate.

Each one features a synthetic stamen and 3D-printed petals based on those of the rapeseed species, to trick the bees into thinking they are real plants.

"It has taken several years to successfully coax bees into landing on the synthetic pollenisers," said Candy. "The colour and form of the unit are important for attraction as bees have a variety of ways to identify flowers."

The flowers are connected to a complex network of motors and tubes, which push a man-made nectar solution to the surface of the flowers to attract the bees.

Pollen was collected by Candy from beehives using a pollen trap – a device that fits over the hive entrance that collects leftover pollen pellets from the hind legs of bees.

The pollen was then fed into a synthetic stamen – the part of the flower that contains the pollen at the end of its filaments – before being sent through the motors, which regulate the amount of pollen distributed to the flower.

Bees then pick up the pollen as they would from a normal flower.

"Bees are easily the most utilitarian pollinators used in industrial agriculture and they are suffering from a variety of environmental problems," said Candy.

"Perhaps in a future where designer crops are no longer able to produce pollen yet still receive it – then the Synthetic Pollenizer could rehabilitate the reproductive cycle of these genetically modified crops."

Designer and researcher Neri Oxman similarly sought to protect bees with her Synthetic Apiary room, which offers precise control of light, humidity and temperature to replicate the ideal environment for bees to survive and produce honey. 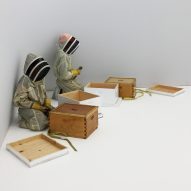 Italian designer Francesco Faccin designed a hive that maintains a constant temperature and shelters inhabitants from bad weather, while Norwegian studio Snøhetta created wooden apiaries to encourage bees to take up residence on the roof of an Oslo roof court.