The latest architectural addition to Norway's scenic tourist routes is a rest area featuring a toilet facility that sweeps upwards from a poured-concrete viewing terrace.

Oslo-based studio Haugen/Zohar Arkitekter (HZA) designed the Ureddplassen rest area for a site along the Helgelandskysten Norwegian Scenic Route in the northern region of Gildeskål.

Ureddplassen is popular with tourists and local residents as it provides a beautiful spot to observe the northern lights in winter, and the midnight sun in summer.

The entire space has been updated to create a better experience for travellers heading north on the coastal road.

The terrace comprises a cast-concrete slab that follows the edge of the curving terrain and separates the freshly re-laid asphalt car park from the adjacent pebble beach.

A series of prefabricated concrete steps forms an amphitheatre that extends down from the terrace to the shoreline. The steps are staggered in places to create seating platforms looking out across the water.

"The view from the steps is unique and there is ample seating well protected from traffic noise," said Steinar Skaar, route manager of Norwegian Scenic Route Helgelandskysten.

The lay-by also features a memorial erected in memory to the 42 crew members who lost their lives when the submarine Uredd was sunk during the second world war.

As part of the project, the memorial was moved to a better location and given a new base made from local Fauske marble. The same stone is used to create monolithic benches with rounded edges that are scattered along the fringe of the new terrace.

At the opposite end of the terrace from the Uredd memorial, the concrete surface appears to have been sliced and pulled up to form a roof of an accessible toilet. 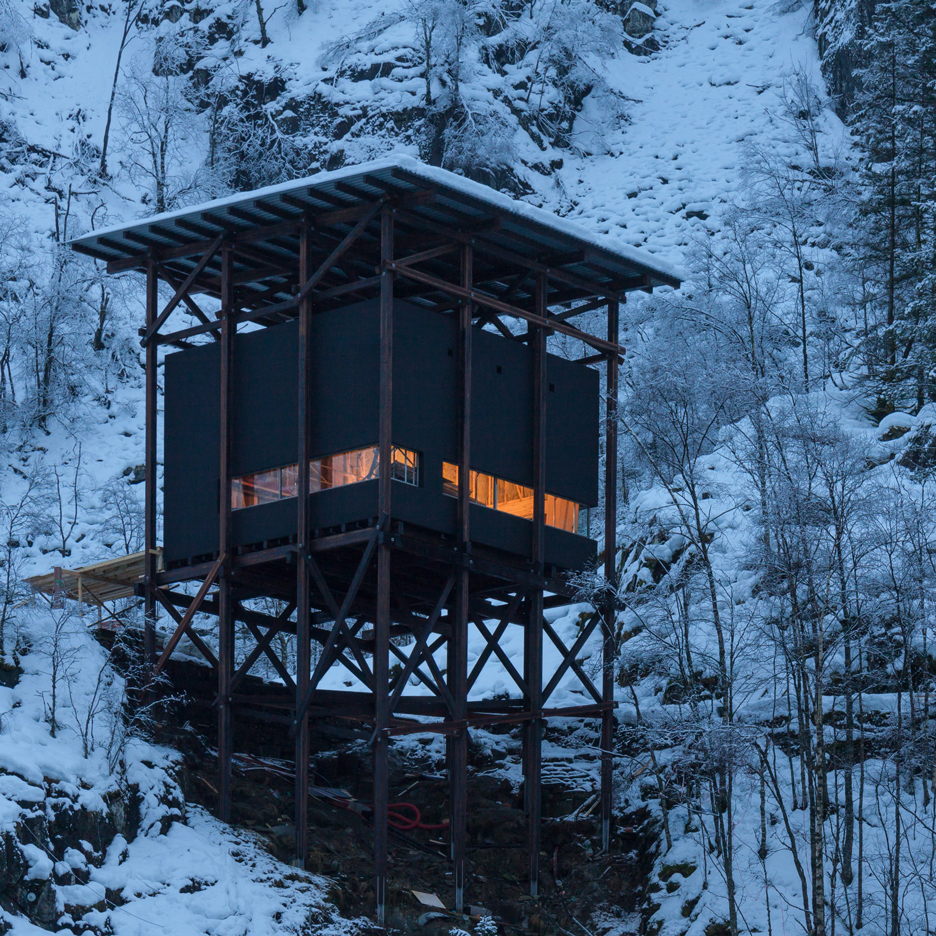 The wave-like form creates a covered entrance outside the toilet, which is lined with translucent glazing so it glows like a beacon when illuminated from within.

The complex forms achieved with poured concrete lend the project a sense of consistency and a topographic quality that complements the rugged surrounding terrain.

"The concrete works in connection with the building and the amphitheatre have been complicated, but we are very satisfied with the results," Skaar added.

"Together with the local contractor, we have succeeded in emphasising the qualities that the architect and the landscape architect intended."

Norway's 18 scenic routes are known for their outstanding scenery, and the Norwegian Public Roads Administration commissions leading architects to create attractions and facilities along the roads.

Previous projects have included a cluster of buildings supported by slender stilts that Peter Zumthor designed for a historic mine, and a toilet block near a popular waterfall with a glazed floor panel that looks down onto a river.

Photography is by Lars Grimsby unless stated otherwise.