A group of graduates from the Icelandic Academy of Arts have traced the global journey of a single banana to showcase the complexity of the food exportation process.

Presented at the DesignMarch event in Reykjavík, the project aims to highlight the reductive nature of food labelling, which the designers argue is not representative of the process of shipping products across the world.

They particularly wanted to tell the journey behind the "made-in" label, which only shows consumers the item's country of origin.

"Taking on a journey for material processing and transport in a truck, train and giant vessel, over thousands of kilometres, we are left with a tiny mark, a sticker, a label carrying the oh-so-intimately acquainted 'made-in' title naming one single country," the designers told Dezeen.

"As familiar as the tag has become, as insufficiently representative it is for our increasingly interwoven and global trading patterns," they explained.

The passport has a traditional booklet format with the Ecuadorian embassy logo on the inner page. It also features a page which lists a bespoke identity number, species and region, as well as the banana's length, width and curl.

It is complete with country stamps to mark the banana's journey through various ports, including Portugal, Panama and Rotterdam.

By creating a passport for a banana, designers Björn Steinar Blumenstein and Johanna Seelemann wanted to make a document that highlighted not only the object's origin but also its transportation story.

"The banana passport was a first attempt to warp the definition of 'made-in' label by personifying the banana as a single character that went through a journey that we trace," they said.

Chosen for its "mundane" properties, the designers traced the banana's journey from its origin in Ecuador to its final destination in Iceland.

Blumenstein and Seelemann spoke to local food importers and studied statistics on banana exportation. They found that the average banana travels 8,800 kilometres on its 14-day journey to Iceland and is touched by 33 people per day in the process.

The passport is part of a larger research project by Blumenstein and Seelemann exploring cargo shipping and includes a detailed made-in label for the journey of two Icelandic exports, aluminium and codfish.

"Banana, clothes, coffee, toilet paper, mobile phone, pencil. More than 80 per cent of the global travels on cargo ships between countries on the world's oceans – the forgotten space," they explained.

"It's quite obvious that the traditional made-in label is losing its point in the age of global cargo shipping and it's time to rethink its purpose.  Is it satisfying anyone's needs except for the industries?"

Dezeen was media partner for the DesignMarch festival, which took place last month and is Iceland's foremost design week.

Other projects showcased there included homeware made from recycled waste material and burgers made of mealworms and algae by IKEA's research lab Space 10. 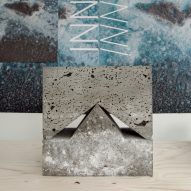